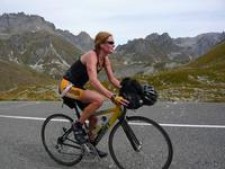 Heading for the famous Galibier!

Well as summer officially draws to a close in the Alps i've just managed to squeeze in a long awaited trip myself....the 'Routes des Grandes Alpes' (RDGA) by road bike. This fabulous journey was first thought of back in 1909 when the Touring Club of France initiated work on joining the highest possible road cols (or mountain passes) for the new and fast improving motor car. By 1913 work was complete and the inaugural run was made in 5 one day stages. In 1937 a new high pass was opened, the Col de l'Iseran at 2764m, and later the Col de la Bonette at an amazing 2860m! This classic French route officially starts at Lake Geneva and finishes at Menton, along from Nice at the Mediterranean Sea. This amazing journey is some 700km and crosses 16 high passes of which many are over 2,000m. So plenty of ups and downs....but not so many alongs! Many of the Cols are often crossed during the Tour de France, such as the Telegraphie, Galibier, Colombiere and Aravis to name a few! Since it's inception the RDGA is now popular for motor bikes, road bikers and classic cars enthusiasts and along the footpaths of the GR5, which run near the road route, are mountain bikers and walkers seeking to complete this wonderful mountain route. As a party of four we enjoyed fabulous September sunshine and enjoyed an unforgetable adventure through beautiful mountain scenery which changed day by day as we passed through many of France's National parks before arriving by the sea. A hard trip to beat in excellent company! Julia