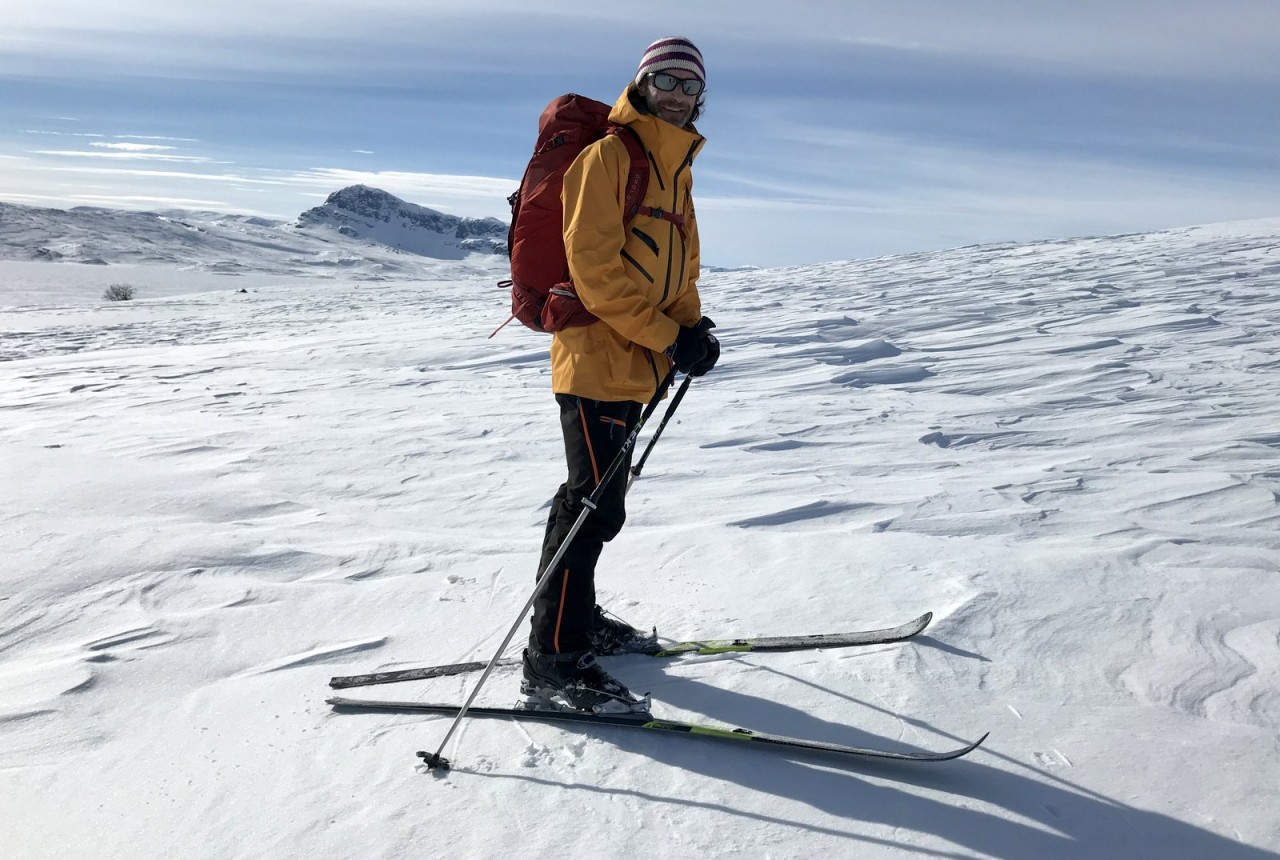 The Hardangervidda in Norway is one of the most famous winter environments in the world. It is a high wild plateau where travelling on skis is the best way to experience the true wilderness. This stunning mountain landscape is Norway's largest mainland national park and home to herds of reindeer, as well as beaver, arctic fox, and elk. This winter we are offering you the chance to experience the solitude, tranquility and stunning beauty of the Hardangervidda.

We have just launched four new 'Off Track' tours which involve hut-to-hut long distance journeys on Nordic skis. Our 'Hardanger Classic Crossing' is very familiar to our guest blogger, and guide, Jason Franks who gives us an insight into guiding this world-class ski route.

Day one was an early start; I’d got up before breakfast to have a look at the beginning of the route - which climbed up onto the start of the Hardangervidda – imagining how I might ascend the terrain on Nordic touring skis, carrying packs and leading a group with unknown skiing ability. We had arrived at the hut the night before by taxi from a remote bus stop on the main road where we had been dropped by the bus after a five-hour journey from Oslo Airport.

It was early April and the temperature was warm down at this height so the snow would be wet and heavy – which would mean a soft wax for the skis or even climbing skins. It was misty with low visibility, and was gently snowing. The first hut was around 26km (16 miles) - with around 500m (1640ft) of ascent - away up on the plateau.

If this route worked out today, we had a relatively short steep climb ahead followed by undulating terrain over and around hills across and around frozen lakes and threading through dramatic peaks with occasionally steep descents. Navigation was going to be challenging, but then this is a just another day on the Hardangervidda and we were setting out to cross it in the following six days.

The Hardangervidda is a Norwegian mountain plateau with a cold year-round alpine climate. It is the largest in Europe and covers 6500 km2 (4062 mi² ) and has an average elevation of 1100m (3608ft). It is also home to Norway’s largest glacier Hardangerjøkulen. The majority of the 'vidda', or plateau, is protected as part of Hardangervidda National Park, which is also Norway’s largest national park at 3422 km2 (2138 mi² ). The Hardangervidda is above the tree-line, so in winter it is a barren arctic tundra that experiences some extreme weather conditions.

Crossing the Hardangervidda – south to north / east to west (or vice versa) has always been seen as a ski-touring challenge and was made famous during World War Two by the Heroes of Telemark; the Norwegian resistance saboteurs who parachuted onto the vidda and skied incredible distances, survived terrible weather and harsh conditions to carry out a highly successful commando raid.

Crossing the vidda can be done either unsupported by pulling sleds, known as pulks, and camping, OR by making use of the DNT (Norwegian Trekking Association) huts and cabins which exist all across Norway. These range from basic cabins with no electricity or running water to the almost luxurious staffed lodges. 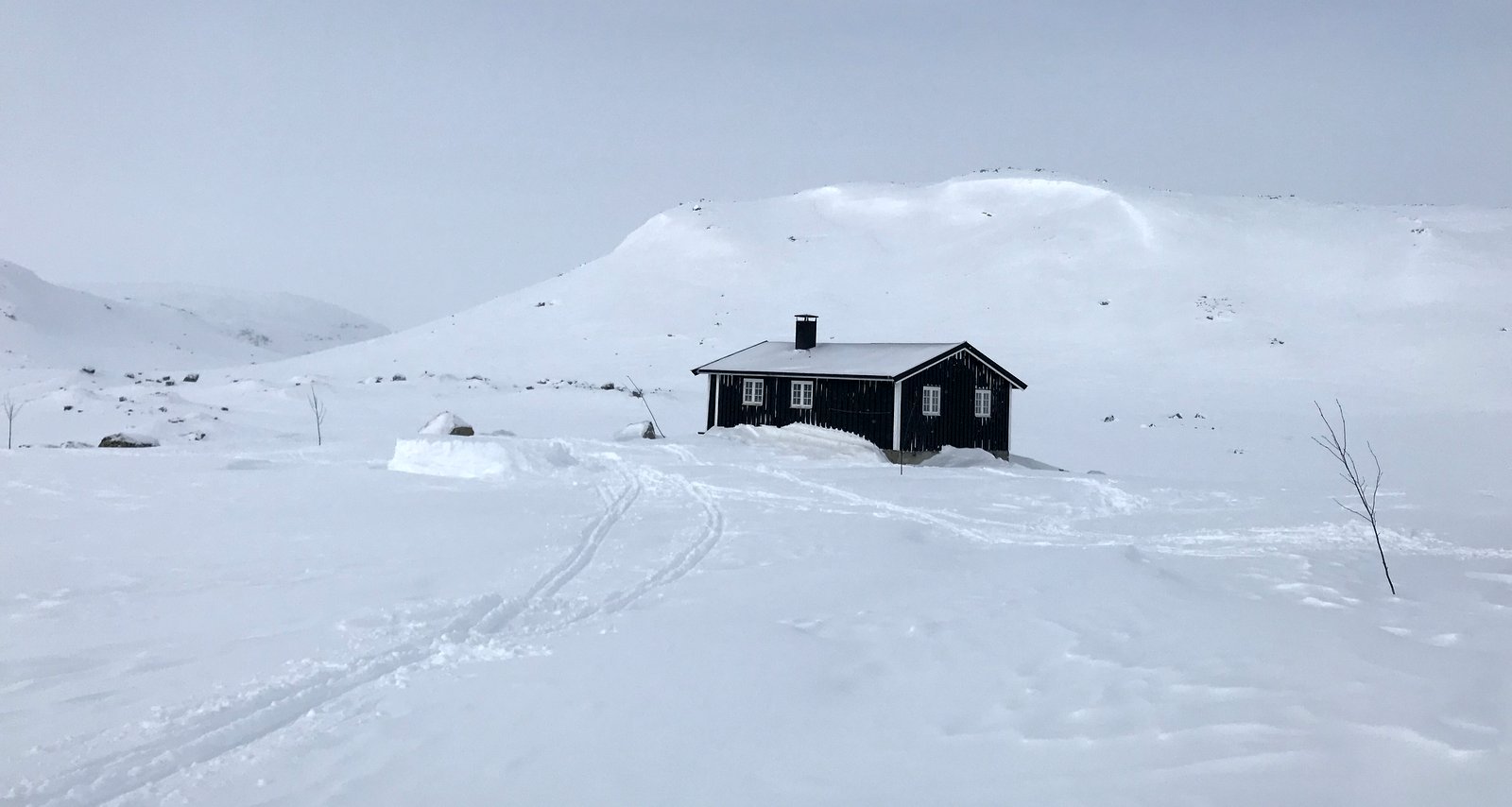 A DNT self-service cabin on the Hardangervidda Crossing

There are established winter and summer hut-to-hut routes which are marked on most Norwegian maps but in the winter on the Hardangervidda there are no cut ski tracks so crossing the Hardangervidda involves off-track Nordic back-country skiing. There might be some route markers, such as birch branches, depending on the time of year and recent weather, but these cannot be relied on, so map and compass and most importantly the knowledge of how to use them, are essential.

The DNT hut system is a well-perfected and preserved system that really works and - much like mountain huts world-wide - relies on good faith. Whilst ‘learning’ the system I’ve certainly been schooled a number of times by wizened Norwegian skiers on the finer details of hut etiquette, mainly involving the detailed in-hut paperwork.

A 'moody' day on the Hardangervidda - our big white world!

Norway is an expensive country, so staying at DNT huts is not necessarily cheap, although the basic unstaffed remote huts are certainly reasonable and by far the most fun - even if you do arrive in the dark after a long ski day and need to use your shovel to dig out the entrance and take over a freezing hut before starting the fire and making it very cosy.

Using DNT unstaffed huts requires DNT membership and a key (all the huts are well provisioned) and staffed huts require require booking. Although the DNT system says that no-one is ever turned away, there have certainly been a few occasions in the busy part of the season and on the busy routes, when I’ve been genuinely amazed at how many people have been squeezed into those little huts, but on other times and in remoter places we’ve often been the only group.

Skiing between the huts on the undulating and varied terrain can be an absolute joy in good weather, but a serious challenge in marginal conditions. Internet access is at best patchy, so taking a snapshot of the route weather forecast is useful but no guarantee, as the weather is prone to sudden and unexpected change.

THE EQUIPMENT AND TECHNIQUE

Skiing across the terrain is a mix of classic Nordic cross-country kick and glide technique on the flat; zig-zagging or skinning up the hills; and telemark / alpine techniques for the way down. Good skis for the terrain are metal-edged Telemark / Nordic touring skis with 75mm Telemark or NNN / SNS bindings and leather or plastic Telemark boots. 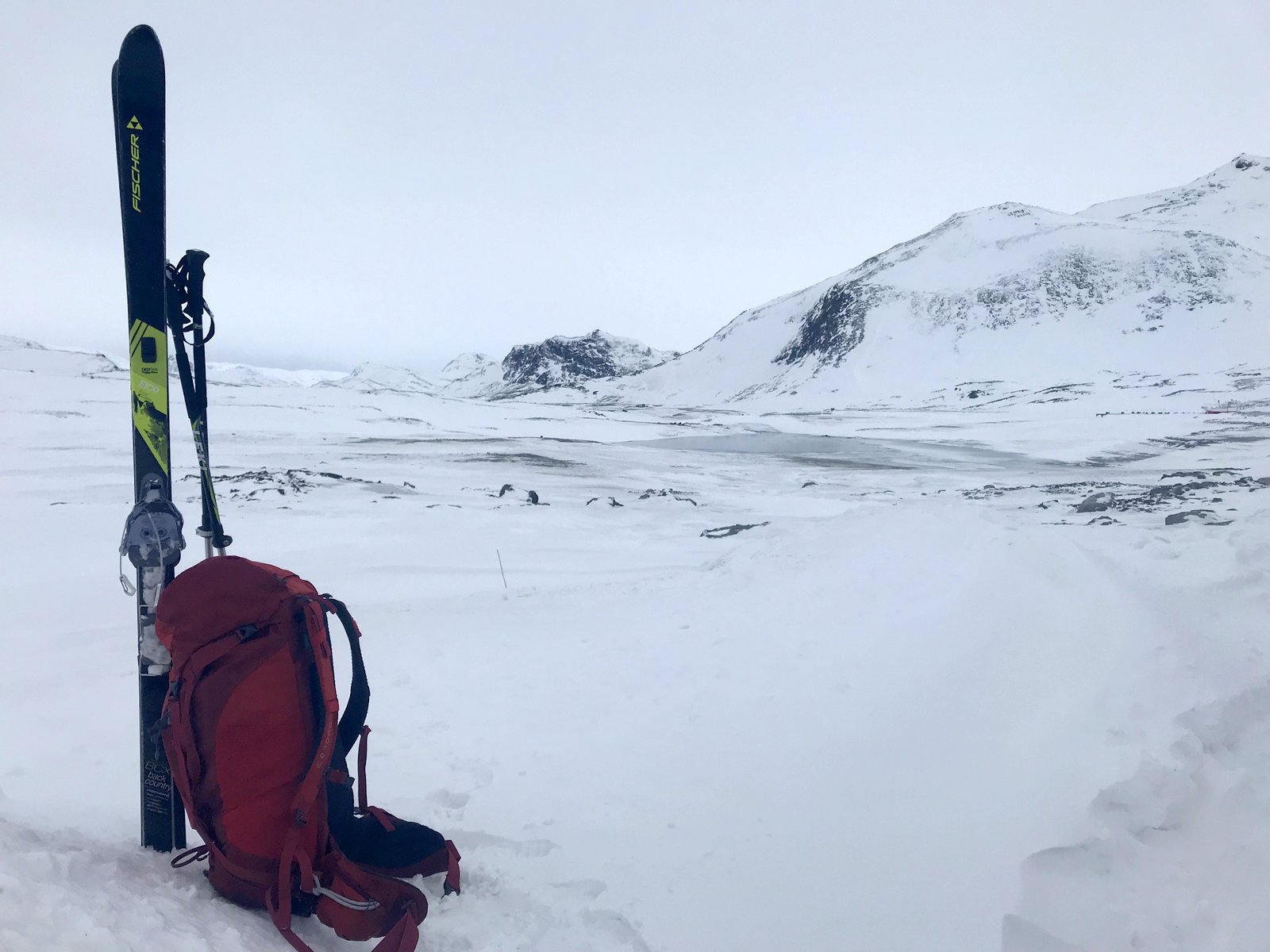 I use waxing skis, though 'fish-scales' are also fine, as whilst getting the wax right each day can be a fun challenge, when you get it right it’s sublime. I also find the 'fish-scale' skis lose glide speed especially on very long gentle descents. The skis we use are wider than Nordic track skis, but they are still light and have enough of a camber for kick and glide. The extra width provides a stable platform for Telemark turns on the way down and enough surface area to attach climbing or kick skins for going up. Skiing with weight on your back is also a big consideration and affects downhill techniques and travelling speed on the flat. A 30-45 litre pack/rucksack with enough to get through a very bad day or even a night in an emergency snow shelter is usually sufficient.

Although it is a tree-less arctic tundra there is wildlife to be seen on the 'vidda'. Wild herds of reindeer roam freely and tracks of arctic hairs, foxes and lemming are often seen madly criss-crossing over the snow. Ptarmigan can also be heard and occasionally seen, and last year I was lucky enough to see a wolverine out on a meandering hunting trip. I’m always hoping to see a wolf!

If seeing wildlife in a wild winter environment is one of your reasons for travelling on skis then the Hardanger is as good a place as any to hope for a sighting. If the 'wild' life fails to appear, then it is quite usual to see the domestic variety as dog-sleds pulled by very eager huskies are a regular sight on the plateau.

THE CHALLENGE AND THE REWARD

Crossing the Hardangervidda is a tremendously rewarding experience and even in a group, in many ways these experiences are very individual. The Hardangervidda can be a place to be alone and experience wild remoteness whilst experimenting with your own mental and physical limits. A place to travel though, where you can contemplate freedom and space and have existential thoughts about the insignificance of human existence as you are dwarfed by the vast, eternal and incredible stark beauty of the arctic wilderness, or you might just enjoy a locally brewed cold beer with your skis, boots and pack off and feet up by the fire, after a challenging 130km (81 miles) six day ski crossing the Hardangervidda. Now, sit back and enjoy this film of skiing in the Hardanger.

For more information about 'off-track' cross country skiing with Tracks and Trails, speak to one of our expert team by calling +44 (0)20 8144 6442 or emailing This email address is being protected from spambots. You need JavaScript enabled to view it.

The author: Jason Franks has a unique skills set and could be described as our very own 'Randolph Feinnes'. Jason is an ex-Royal Marines Commando Officer, Commercial Helicopter Pilot, RYA / MCA Yachtmaster Ocean yacht skipper, MTA Winter Mountain Leader, BASI Telemark and Nordic Ski Instructor. During the winter months he works freelance leading off-track hut tours in Norway and from winter 2020 will be part of the Tracks and Trails new 'off track' leader team.