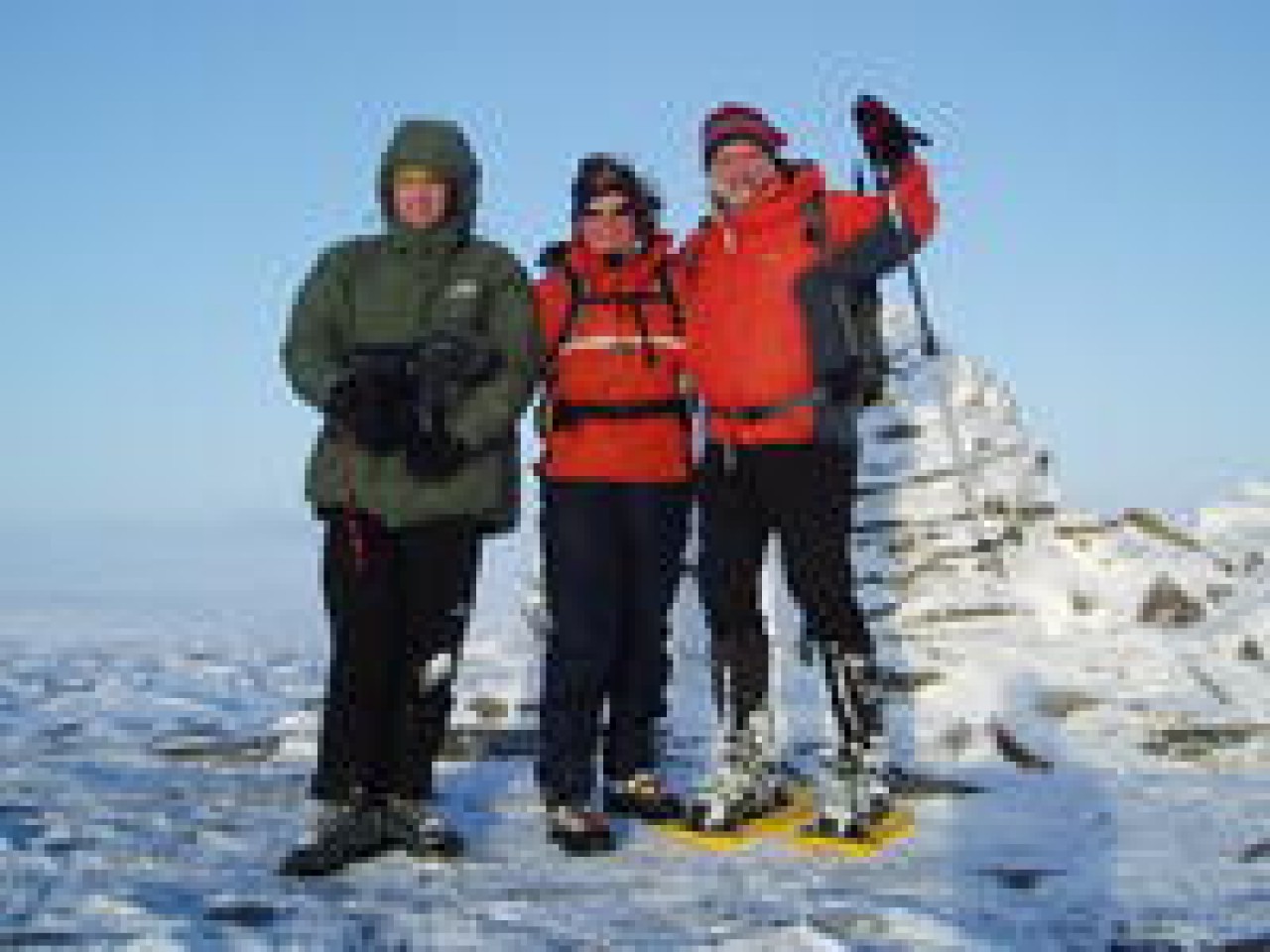 What a day it's been - blue skies, snowy mountains and a biting cold wind on the summit. A day when you are glad to be alive and in Scotland! I left the Alps a week ago to nip back to Scotland to do some media work for the BBC. It included today's expedition into the Monadliath mountains behind Newtontmore for The Adventure Show which is broadcast on BBC2 Scotland each month.

Over the last year I have, on several occasions, worked as a television Director with Cameron McNeish who is often referred to as the UK's best known hill walker! I have to say the man is a treat to work with and I know no one else who has so much genuine enthusiasm for Scotlands' mountains and is prepared to share that enthusiasm so eloquently. Our intention had been to travel to Schiehallion in Highland Perthshire but heavy snow and blizzard conditions put paid to that. After several cups of tea in my kitchen, calls to the Police asking about roads, and calls to the camerman Paul Diffley to find out how far up the A9 he had got, we decided to film in our own backyard in the stunning Glen Banachor.

The Monadliaths are a great rolling mass of heather and bog and perhaps lack the sharpness of the west coast mountains, but give them a covering of snow and they are transformed into a glittering arctic landscape which is home to mountain hares, grouse, snow buntings, golden eagle, otters and red deer. As Director I am responsible for making sure the shoot happens and that we get the necessary material for the TV feature. I had serious doubts about shooting anything and of getting any views, but the more cups of tea we had the clearer the sky became until the clouds parted to promise a good day. In fact, it was stunning and despite the exhaustion of plodding through thigh deep snow drifts to climb A'Chailleach, 930m, we were exhilerated - 1. because of the beauty of the mountains, and 2. because we had pulled it out of the bag despite a rocky start to the day.

Best of all Cameron had opted to wear snowshoes for the filming. It will, I am sure, be the first time that someone has been filmed making a journey on snowshoes in Scotland for national TV. Unfortunately, and don't laugh, but I didn't have any as all mine were in the Alps. On more than one occasion, Mr McNeish bounded past saying "aye, you should get yourself a pair of snowshoes!" I nearly tossed my teddy out of the pram! The great joy for me was that he was another snowshoe convert and had heartily embraced this ancient form of winter travel. The fact he was telling his many thousands of fans through the medium of TV that they were to be highly recommended was great.

The picture shows cameraman Paul Diffley, myself, and Cameron on the summit of A'Chailleach. A great place to be on a blue sky day in Scotland.

PS The Adventure Show feature on snowshoeing in Scotland will be broadcast on BBC 2 Scotland at the end of February. I will try and let you know exactly when once I have the details.

Join us on a winter holiday in the Alps to find out why Cameron is a convert to snowshoe adventures in the mountains.