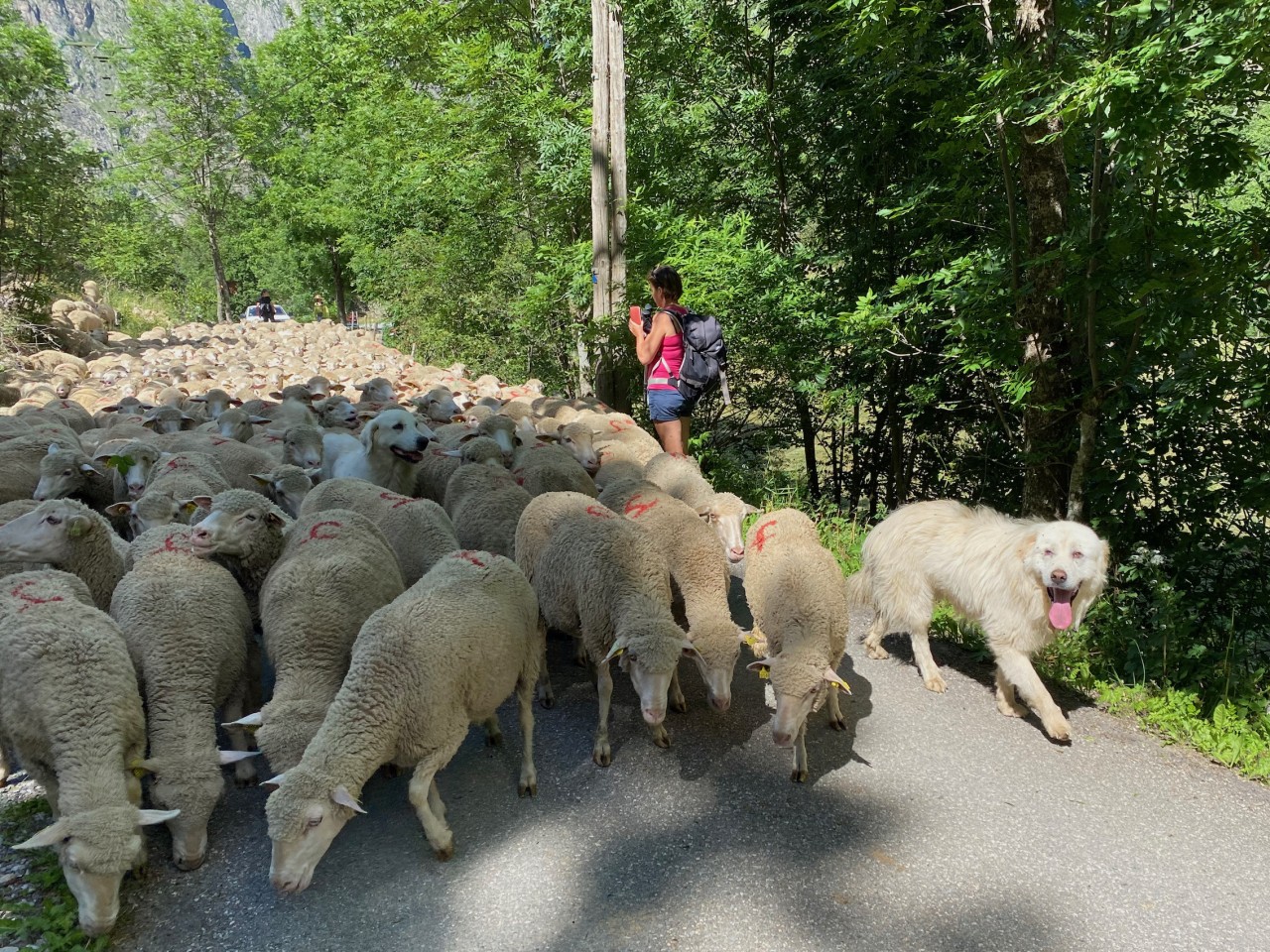 To be able to slow down and take life at the pace of the 'montagnards' is hugely appealing right now. Too much social media, press, politics, Covid, Brexit and such like make me shy away from the digital world and long to be back in the mountains. In a remote valley in the French Alps I discovered a haven of tranquility where chatting to your neighbour is more important than your Facebook 'Likes', and where the seasons dictate the pace.

After twenty minutes of driving up a narrow valley which seemed to be leading 'nowhere', and clearly would finish simply when the road ended, I was beginning to wonder about the wisdom of booking at a campsite in a village I had never heard of. Just at the point when I was thinking "OK, let's give in one night and see how it goes" the view opened out and we arrived in a small and hugely characterful village with wild, wild mountains towering above it, and waterfalls cascading down the mountains. Welcome to La Chapelle-en-Valgaudémar a world apart.

The valley feels like another world where 3000 metre (9,840 ft) peaks tower over the village and farmers who are making hay while the sun shines. The peaks are snow clad and dramatic such as the Olan, Les Bans, and Les Routes. The entire length of the valley  beyond the village is lined on both side by massive waterfalls earning it the name Routes des Cascades, or Route of the Waterfalls in English.

One of the early French mountaineers described it as Europe's Himalayan Valley, and having worked in Nepal I can relate to the description. With its rugged peaks and spires and the juniper covered mountains, with eagles and vultures flying overhead I could easily imagine I am back in Nepal. I am in fact in the Ecrins National Park which has over 150 peaks over 3000 metre (9,840 ft), and lies south and east of Grenoble.

How on earth did they survive here a century ago? A question that kept my mind occupied during our stay. The hamlets were, and are, occupied all year round, and with snow on the ground for around 5 months of the year life I cannot imagine life was easy in the 'old days'. There are many villages to explore along the length of the valley and in particular there are the ruins of Navette where the information boards tell a story of the fate of the villagers of Navette.

In the early 1900's there were 17 families living in this tiny village, 93 souls in all. They had pigs, sheep, cows, and some goats, and there was a resident wood worker, tailor, herbalist, and miller. They traded their produce from their livestock with the villages further down the valley in exchange for salt, sugar, and pasta!

However, a massive flood destroyed many of the homes in Navette, that coupled with the young men being away fighting in WW1, plus an outbreak of Spanish Flu sealed its fate and the last inhabitant left in 1936. Today you can wander through the ruins, although the chapel has been rebuilt to honour these hardy people.

There is a wonderful pleasure to be had from wandering the trails around the valley and watching the farmers turning the hay in the sunshine. The wildflowers are more abundant than I have every witnessed anywhere in Europe and the hay must taste very good to any livestock. The flowers do indeed look good enough to eat.

There are many walks in the valley, and seriously challenging long distance hikes linking remote mountain refuges. Any hike takes you past the ancient homes which were built to be perfectly adapted to the climate; solid, square, built using dressed stone.

The room where people and animals lived together was on the ground floor. The entrance to the house was protected from the snow by a "toune", a large vaulted archway (often painted with lime, then coloured white or blue), above which a stairway led to the barn. Later on (in the 18th century), the locals used thatching - a good insulator - for the roofing.

Today you can still see a few thatched homes such as on the walk to the high mountain pastures of Aup where the shepherds watch over their flocks from June until September.

Transhumance and the Patou

Transhumance in action: the seasonal movement of the people with their livestock. Can you see the Patou?

It was a pure joy to witness the Berger (Shepherd) and his family taking the sheep up to the mountain pastures. The farmer told me he had 150 sheep and they were heading for Aup where they would spend the summer months before returning to the valley for winter.

As a former sheep farmer my brief conversation left me smiling for the rest of the day. Fond memories of working my sheep dogs in the Scottish hills. However, these shepherds use a type of dog which is alien to me - the Patou. These Pyrenean mountain dogs have been used for centuries as guard dogs rather than herding dogs. They are trained to scare off predators such as wolves, lynx, and foxes.

The Patou have a tough life as they are raised with the sheep and receive little affection in a bid to keep them almost semi-wild. A feral dog which when crossed in the mountains requires caution if you are not to receive a nasty bite. Some campaigns have been launched in France to educate hikers about how to behave when they meet a Patou. The films are in the French language, but if you don't speak French the cartoon below is still worth watching.

The British have a long history of exploring the Alps and they seem to have got into every nook and cranny, and even made it to Valgaudémar. In the 19th century it was the fashion for the wealthy and adventurous to head for the European Alps. Coolidge, the American born, historian and mountaineer, climbed several of the nearby summits. 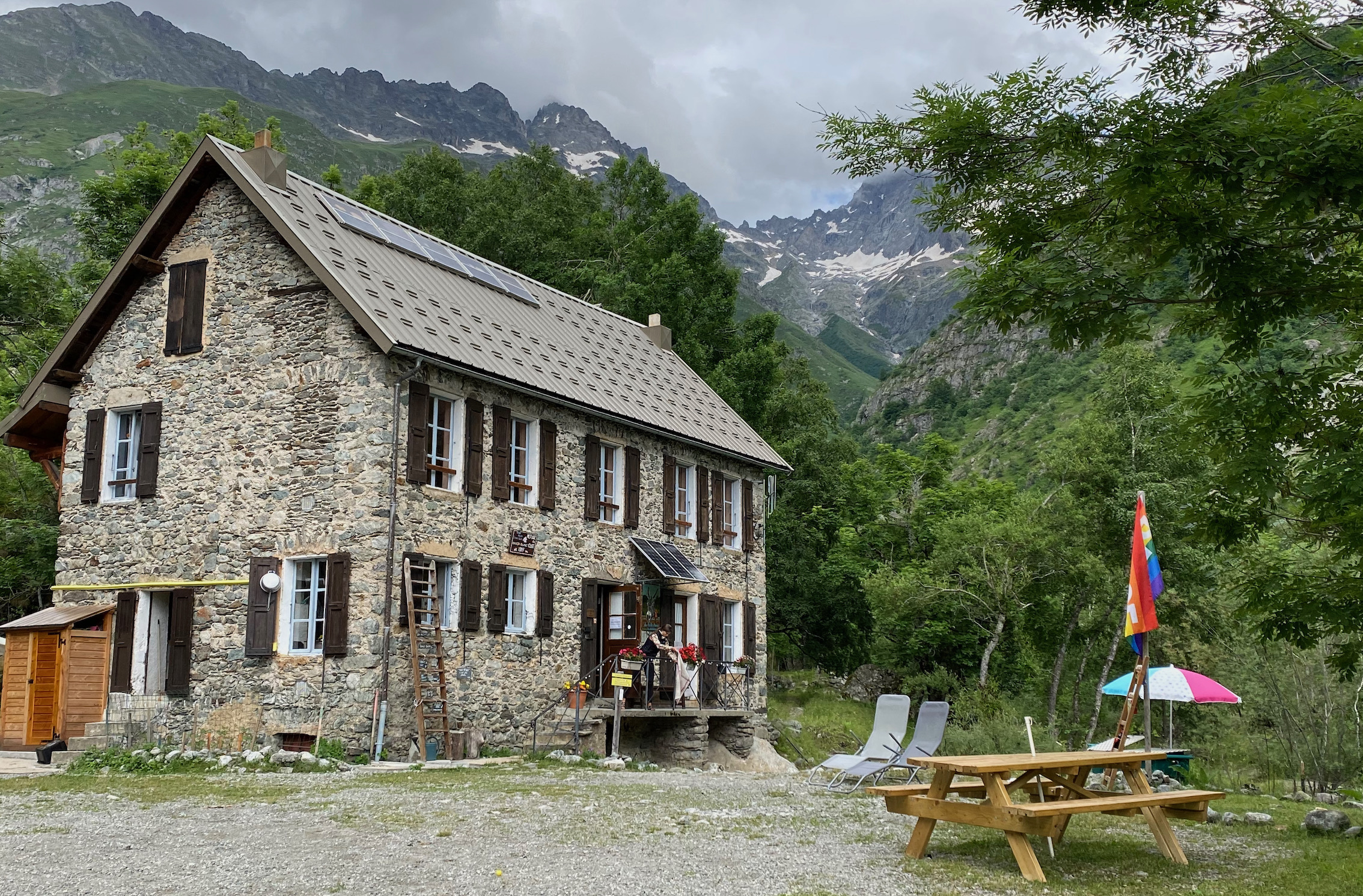 The Refuge du Clot Xavier-Blanc is just one of many to be found throughout the Ecrins. Open from late Spring until the Autumn they are a great place to stop for refreshments or to spend the night if you are on a multi-day journey.

Today there are many mountaineers and many enjoying the hundreds of km's of trails in the Park. With many point-to-point or circular routes to choose from it is indeed a mountain-lovers paradise.

For more information about trips with Tracks and Trails, speak to one of our expert team by calling +44 (0) 20 8144 64442 or email This email address is being protected from spambots. You need JavaScript enabled to view it. We offer hiking and trail running in summer, and cross-country skiing and snowshoeing in winter.