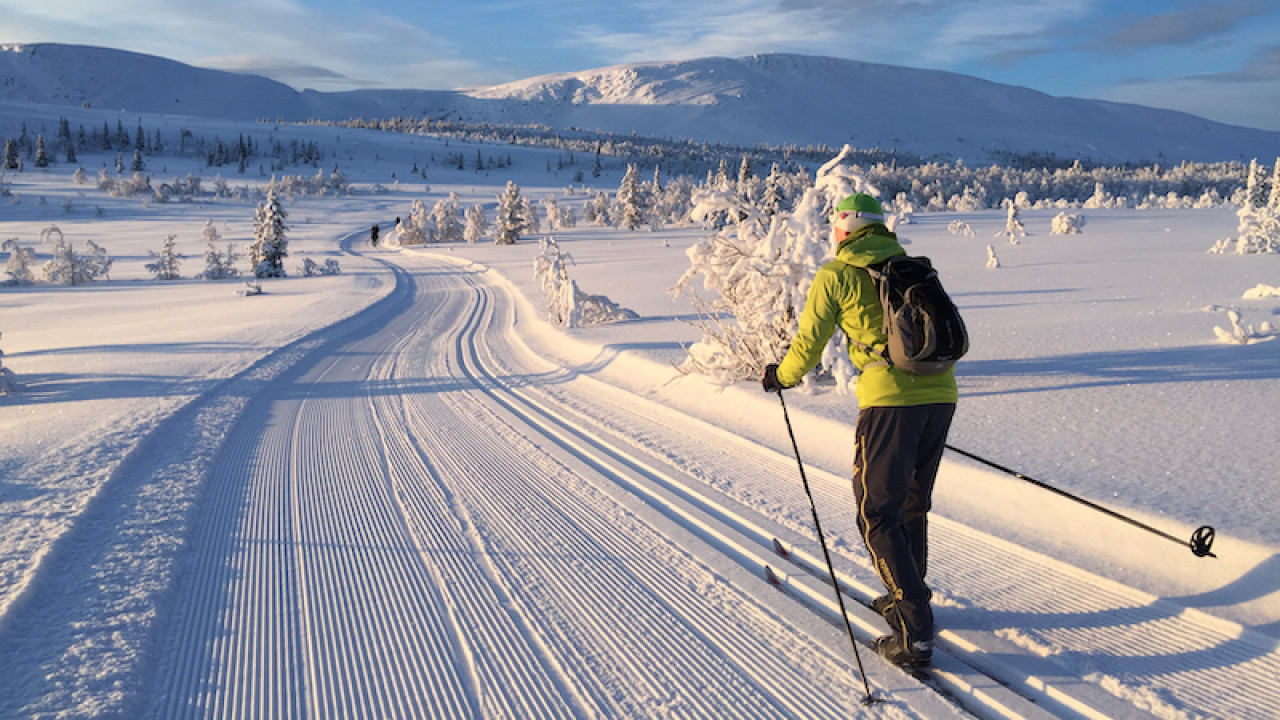 Gliding through the silent winter forests of Finnish Lapland is a truly magical experience. The landscape lends itself to an atmosphere of mystery shrouded in folklore. There are many tales of the forest folk, and of the aurora borealis known as Revontulet, which describes the ‘Fox Fires' seen in the night sky. Deep are the legends and deep is the winter snow.

Cross-country skiing is a hugely popular way to explore the Finnish nature in the winter months. Like all the countries of the north Finns grow up on skis, and its second nature at its very best to watch families and friends glide across the landscape. It truly is one of the best ways to put distance between yourself and the hustle and bustle of every day life.

The area of Finland referred to as Lapland claims to have the worlds purest air combined with breathtaking views. We are disinclined to disagree! Spending a week cruising the forest trails with the fells on the horizon, and the promise of food cooked over an open fire by the trail is a very fine way to spend a holiday. 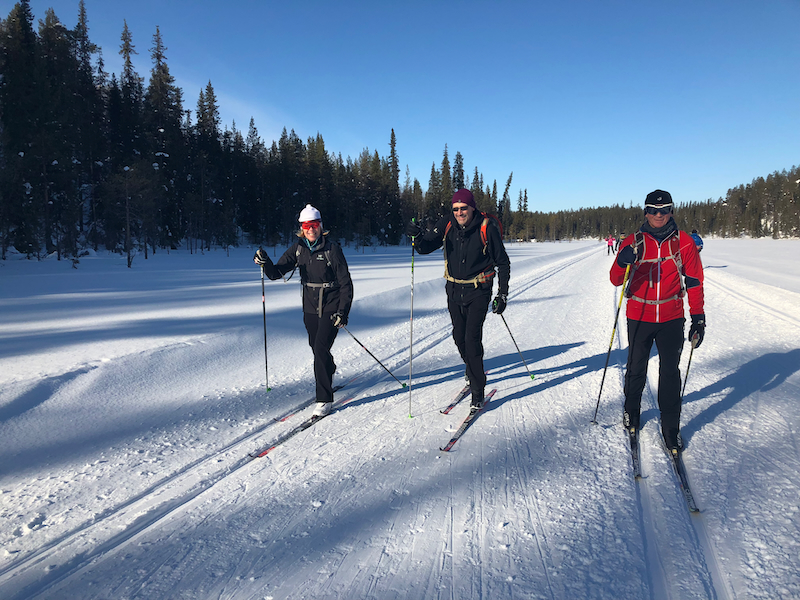 Cruising the tracks in Äkäslompolo, Finland

'Vastness' is the word which comes to mind, when skiing in Lapland, the landscape feels immense. The Pallas-Yllästunturi National Park, where we base our cross-country ski trip, is Finland's most popular park and a visit will ensure that you soon understand why.

Cross-country skiing is very much a national sport in Finland, and the country ranks third in the world in terms of medal winners. No surprise really as the children grow up with skiing as part of every day life. Whether it's to travel to school, meet friends, or visit the shops its all done on skis.

The Pallas-Yllästunturi National Park is Finlands third largest national park and it covers an area of 1,020 square kilometres. The national park is in fact in the area known as Western Lapland.

Here the landscape is dominated by a chain of fells, low rolling mountains, stretching for around 100 km (62.5 miles). The area is also home to the taiga forests. Sometimes referred to as a boreal forest or snow forest, the taiga are full of pines, spruces and birch. The wildlife sheltering here in winter includes herds of wild reindeer. The Pallastunturi Fells have been chosen as one of Finland national landscapes.

There are over 100 different research projects taking place in the area. Part of these are related to studies of international air quality. The results of these studies have shown that the air at Pallas is the cleanest in Europe. Further research is also being carried out into the environmental effects of tourism and the ecology of and fluctuation in the mole populations.

A 'Kota' is a traditional structure used by the Sámi – Finland's indigenous people, who have herded their reindeer through its lands since time immemorial. Today kota have a wider use and are to be found scattered along the ski tracks. Always a welcome sight for those in need of some food and a warming fire. In fact cross-country skiing in Finland is extremely civilised! 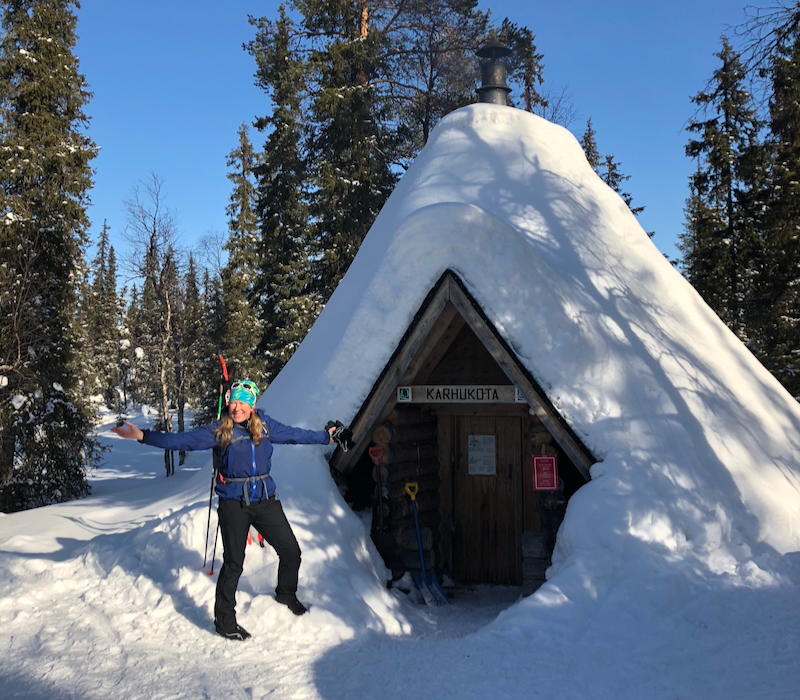 Always happy to stop at a kota!
Essentially, a kota is a small wooden cabin, usually made of wood, and with a fire pit in the centre. They are also often hexagonal in shape which lends itself to a circular seating plan when everyone gathers inside. Everyone gets an equal share of the fire pit, and the sausage grill.
It's quite common to ski with a packet of sausages made to local Finnish recipes and then grill them on the open fire. The kota are accessible all year to those who want to stop and rest for a while. 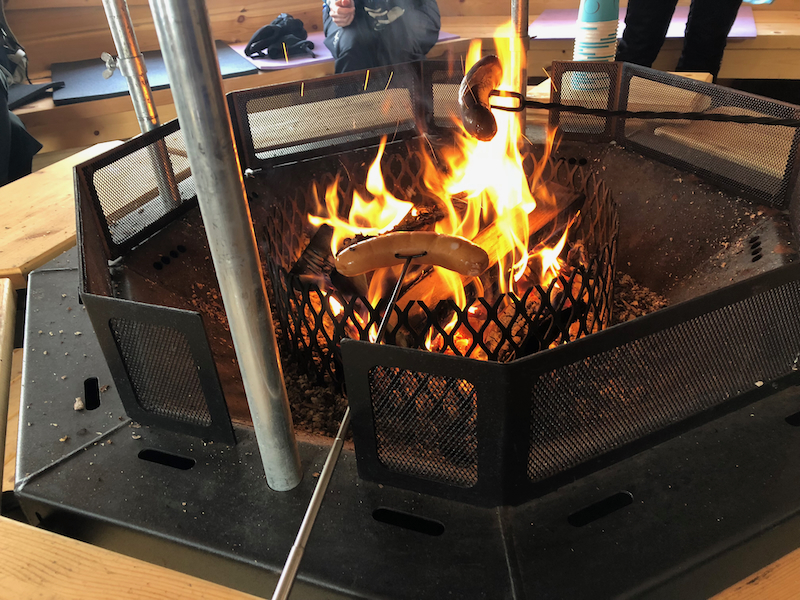 Lunchtime stop for sausage on the grill at a kota

The Sami are the descendants of nomadic peoples who inhabited northern Scandinavia for thousands of years. Today the Sámi are the only indigenous people within the European Union. When the Finns entered Finland, beginning about 100 A.D, Sami settlements were most likely spread over the whole of that country; today they are confined to its northern extremity.

The total population of Sami in Norway, Sweden, Finland and Russia is estimated to be about 80,000. Many think that Sami traditions only consists of colourful costumes, traditional handicraft products, and catching reindeer with lassos. Not true. Today the Sami heritage is also visible and alive in everything from rap music and modern architecture to contemporary art and cutting edge design.

Sami music received a boost a few years ago when it reached a popular television programme in Sweden. The Sami way of singing, is called a yoik, or joik and is a song-chant sung a cappella. Joiking came to the fore in 2015 when a young Sami man, Jon Henrik Fjällgren came to fame when he took part in a competition to represent Sweden in the Eurovision Song Contest. The album that was released was called Goeksegh which reached number six on the Swedish Albums Chart.

folklore and the Aurora borealis

Immediately recognisable, the aurora borealis is automatically associated with Lapland. Until science intervened, there was no way of telling what caused the Northern Lights. As such they became a source of great mystery and intrigue for cultures across the world, including the Sami.

Many cultures associated them with spirits: the ancient Chinese and Japanese believed they were great dragons fighting in the sky. Norse culture during the dark ages believed them to be the spirits of the Valkyries bearing those slain in battle to the Viking heaven, Valhalla.

In Finnish Lapland they are still called Revontulet, which literally translates to ‘Fox Fires’. As legend goes, the lights were caused by a great fox spirit sweeping his tail against the snow and spraying it up into the night sky. A much more beautiful explanation than the scientific! 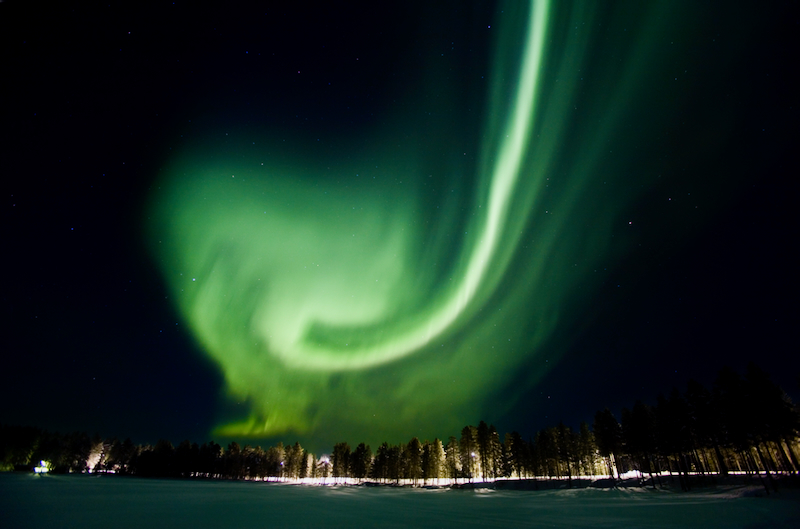 In Sami culture, they believed that the lights are created by the souls of the departed, and by disrespecting the Northern Lights you were sure to bring bad luck upon yourself and your family. Disrespectful behaviour included talking too loudly while they danced over head, and even gazing directly at them.

I remember that while skiing the Finnish Russian Frontier that our local guide explained that as a child she was often told to behave, or the Revontulet the Fox Fires would take her away. The things we tell children for some peace and quiet.

Fishing is incredibly popular in Finland and in winter! There are sixty-seven species of fish found regularly in Finland; if you take into account other occasional visitors, the figure rises to one hundred. Of these, just over a dozen are game species that feature in sports fishing. The most common species to be found in the lakes in Finland are pike, perch and zander.

It is almost a daily feature of our skiing to stop for a few moments and watch the ice fishers on the frozen lakes. How they manage to patiently spend hour after hour in the freezing air is a mystery. 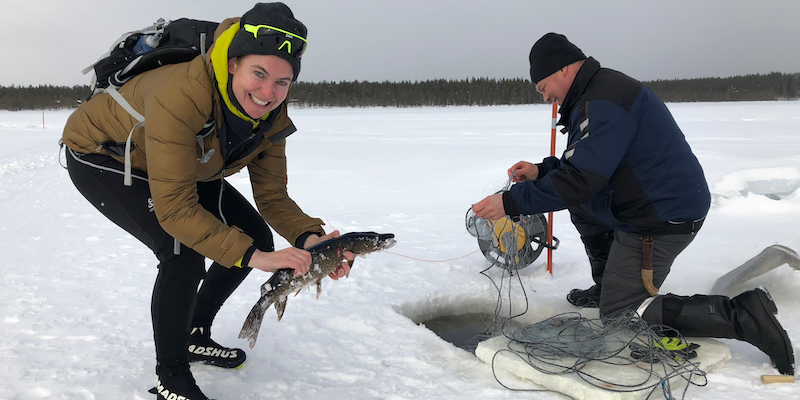 Checking out the catch beside the cross-country ski tracks

Finland is a land of many nuances and exploring on cross-country skis while soaking up the atmosphere in mythical Lapland is an adventure holiday that we recommend for your bucket list.

For more information about cross-country skiing with Tracks and Trails, speak to one of our expert team by calling +44 (0)20 8144 6442 or emailing This email address is being protected from spambots. You need JavaScript enabled to view it.