Confessions of a Snowshoe Convert 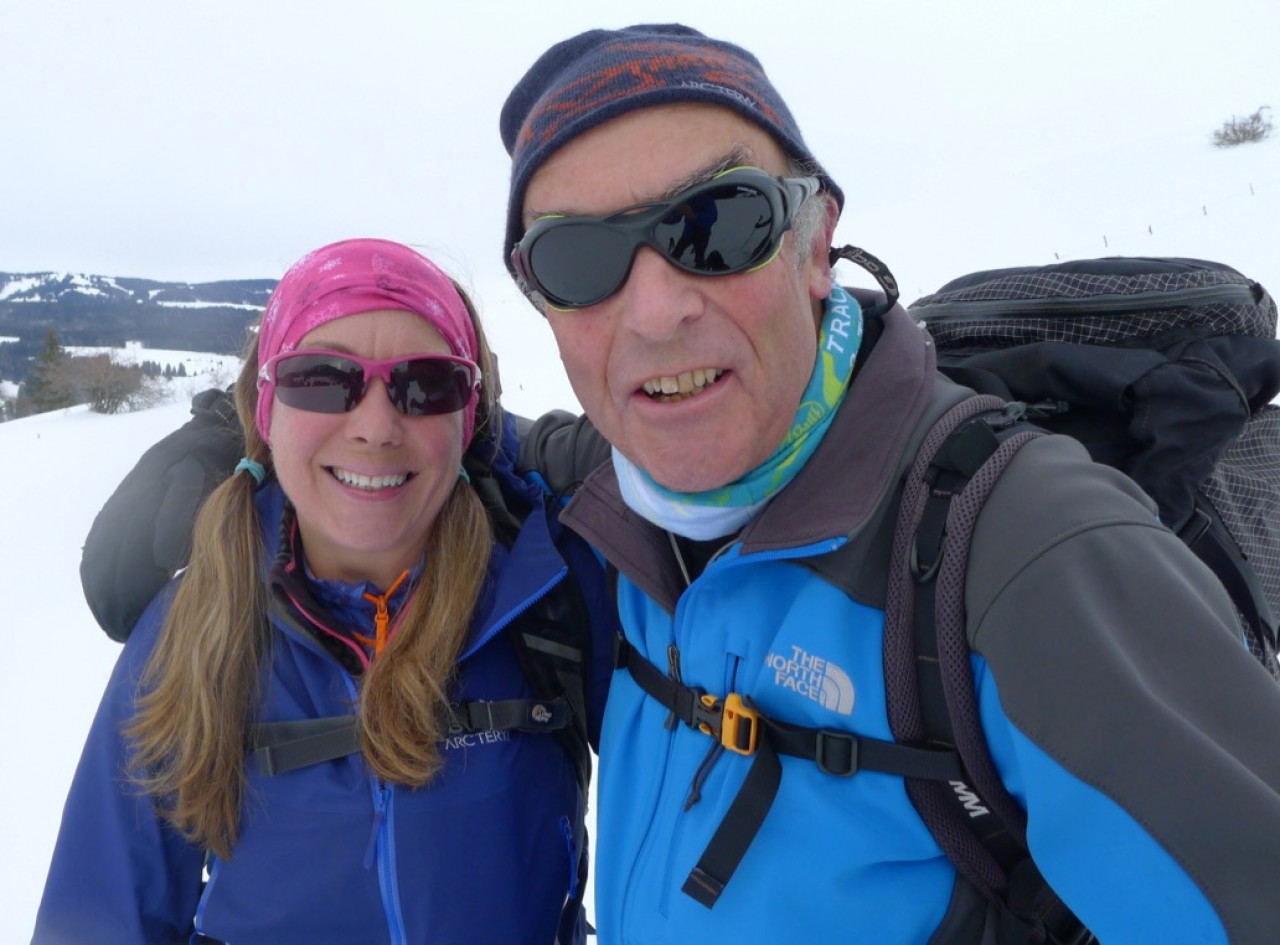 Snowshoeing anyone? For over ten years we have been lucky enough to guide George and Margaret on snowshoe trips across Europe. They have become our pioneers in terms of exploring new routes and areas. Now of mature years they are wonderful ambassadors for snowshoeing and as an example of how to continue to enjoy the mountains no matter what your age.  They first joined us in 2009 when they were cross country skiers. However, the skis were soon abandoned and they were converted! The following is George's version of events.

"In 2009, while trekking and climbing in Nepal, a friend suggested that Margaret and I might enjoy a week on snowshoes with T&T.  I was up for it, but Margaret said that I should find it boring relative to our usual winter activity of cross-country skiing, where we were enthusiastic, but less than expert participants.  Always up for something new, we decided to go for it while continuing with a separate week on cross-country skis.  The rest is history. The skis were abandoned and we were converted.

We were particularly enthused by bumsliding, to which Lindsay, our guide, introduced us within a couple of days.  For the uninitiated, this involves sitting down on the snow at the top of a steep slope, letting go and controlling the slide by dragging the tips of your walking poles in the snow behind you. In 2009 at the age of 65, we could become 7 year olds again!

Since then, we have been on snowshoes every year and more recently twice a year.  There is the big advantage that as we age, there is an increasing aversion to falling, which was an inevitable part of our rather inexpert cross-country skiing. While wearing snowshoes it is actually very hard to fall, unless in deep powder and you have a wobble. In which case you have a soft landing anyway.

Late 2012, I had a silly accident while walking with cross-country skis on 'black' ice from the railway station to an hotel in St Moritz – result – a fracture of the left femur probably caused by a fall onto the skis – rather bad news!  I was informed by the surgeon at the Klinik Gut that it was a complex, multiple fracture and that I should take great care.  I was also told that I should need the crutches for 8 weeks minimum.  Precisely 8 weeks after the accident, I ditched the crutches (engineered by the Swiss to the extent of including flip-over mini-crampons) and we both set off for the Alps to join our planned T&T snowshoe tour in France.

During the week in Névache, other than on one day, not only did I complete all the days bar one, but I kept up with the group.  One of my treasured memories from the trip was when walking just behind a German woman – a university teacher of linguistics, no less – she stopped ahead of me and exchanged words with Lindsay, asking her if I was using a prosthetic device.  When Lindsay summarised my injury, the linguistics lecturer said that she thought that it was far too dangerous and Lindsay (and I) should know better!  She continued up the hill and after a few minutes, I overtook her although quite unaware of the conversation and Lindsay raised her arms with a quiet YES!!!

Other fun times have been when on one snowshoe week, on five ex six days, we completed more than 1,000 metres of ascent, with the sixth day registering only 965 metres.

One other treasured memory was when Lindsay decided (rightly) that the avalanche risk of continuing our ascent was just too great and so we turned back when quite close to the summit of a minor peak.  Having descended some way, she asked us how fit we were feeling.  We said fine, so she suggested climbing back up to the col below the peak on the other side of our original attempted ascent.  It was clear even then that she had her eye on a neighbouring peak and yes, it was a long day, but we all summitted successfully.

One further memory is when earlier this year in the Dolomites, with our guide, the appropriately named Guido, we descended from a mountain hut where part of the route took us down part of a minor via ferrata – never once did I imagine descending such a route on snowshoes!  And we recovered our nerves the following day with some really long bumslides – what fun!

The great advantages of snowshoes are that it is very hard to fall as the shoes give such stability and the process takes 5 minutes to learn.

Now enthusiastic snowshoe people, we go twice every winter – once with our family, who rush off skiing down the slopes and once with T&T and a small group.  We love it!  So, if you are still a 7 year old at heart, even if there is now a ‘0’ after the ‘7’, and are willing to try bumsliding (although this is not compulsory) and to enjoy the beauty of the snowscapes, going to places where only an expert skier might visit, we recommend a week with T&T on snowshoes.  Who said ‘boring’ – we love it!" 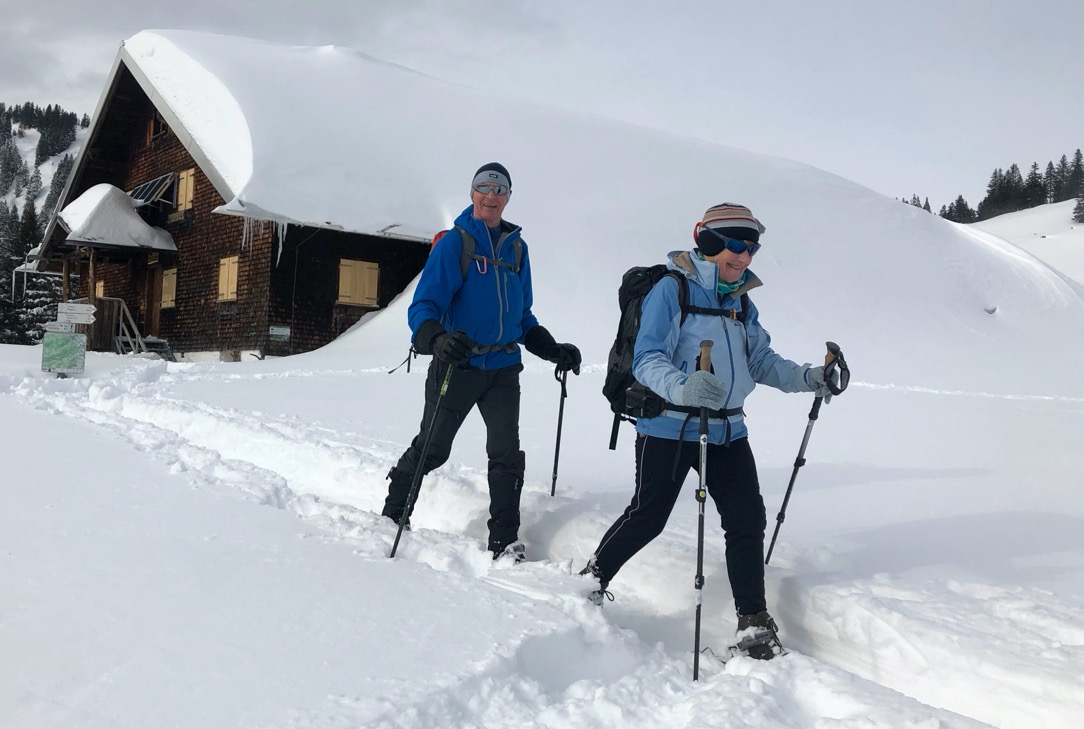 Margaret Taylor striding out and 'youngster' Noel trying to keep up. Go girl!

For more information about our snowshoeing trips, either bespoke or Scheduled Departures, speak to one of our expert team by calling +44 (0) 20 8144 64442 or email This email address is being protected from spambots. You need JavaScript enabled to view it. In addition to snowshoeing we specialise in cross country skiing, and in summer hiking and trail running.