Becoming a Better Skier: an account of our Ski Skills Week in Venabu 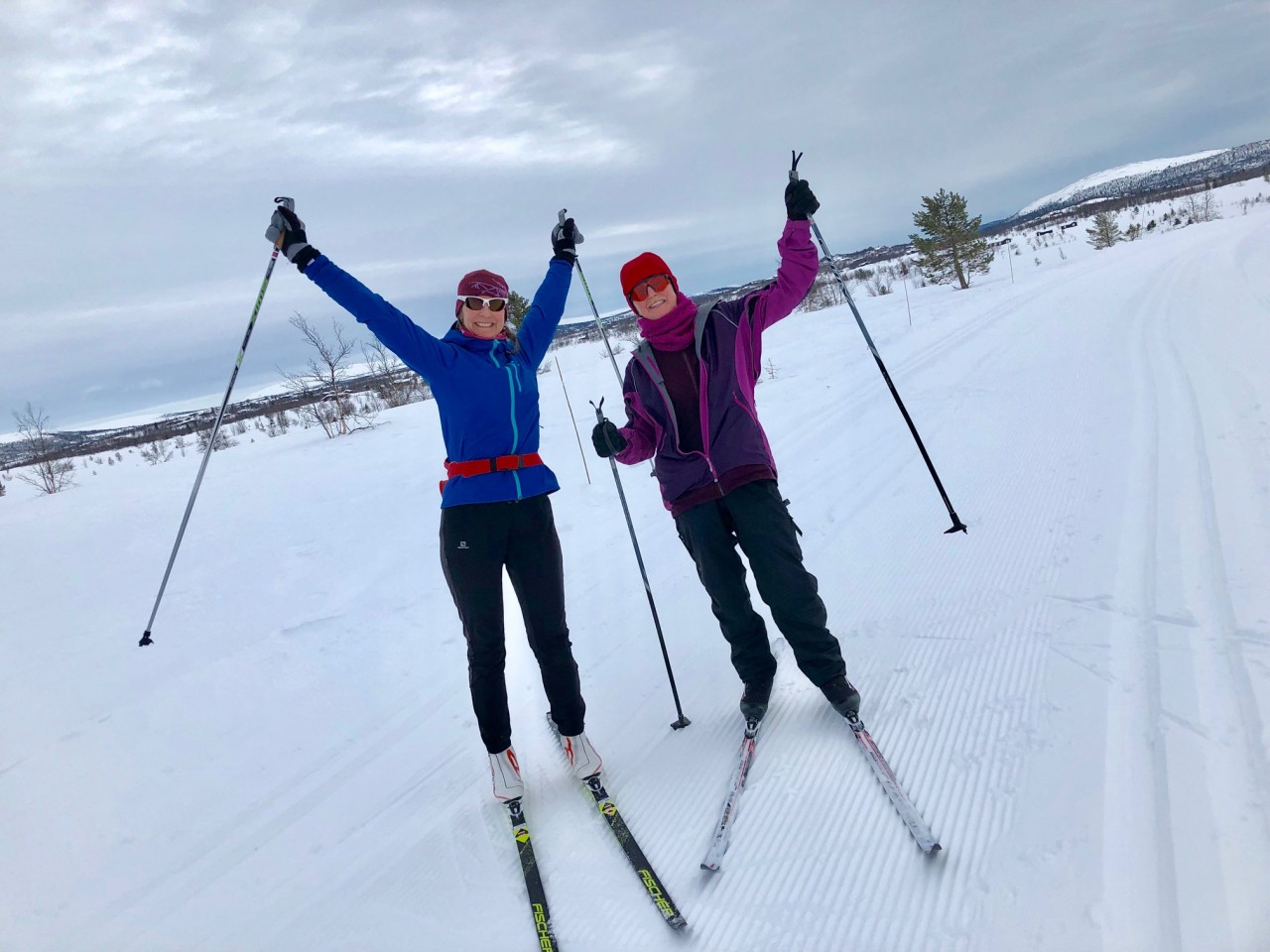 An indoor warm up! That’s different. None of your stretching. Balance before strength. From now on it’s to be dynamic exercise grounded in an understanding of bio-mechanics in preparation for our skiing. Down to the Skistall for a quick application of blue wax and we’re out on our skis for an hour of well-tuned instruction in perfect snow conditions.

Effortlessly it seemed, with good humour and lots of words of encouragement, Ewen revisited our body movements:

For many of us it was a revelation, after years of muddling along thinking we knew what we were doing.

After mid-morning coffee, we were out again, practicing and fine-tuning what we had learnt earlier. Simple! The aim was to achieve more with the same or less effort.

A sandwich lunch back at the hotel, then we were out for a treat - the Trimløype - a gentle descent through the woods - trees garlanded with snow like candy-floss. After a refresh of the wax, we soon found ourselves looking back up at the Fjellhotel.

You may have thought we’d finished. Not a bit of it! An hour of pilates led by Joy awaited us. Assured that we would feel the benefit in the morning, we squeezed our glutes, tucked in our tummies, balanced our pelvis, stretched our spines and held the infamous plank.

Time to head for the sauna …

Dinner in the Venabu Fjellhotell is a gourmet’s paradise, with a huge range of delicately cooked seafood, meats, salads and vegetables, all followed by an exquisite range of home-made desserts and a cheeseboard to die for.

We all commented on the benefits of the pilates and stretching from the previous afternoon - none of that usual first morning stiffness!

Following breakfast watching the subtly beautiful changes of light on the Rondane Mountains, we were promised a full wax treatment! Ewen took us through the different considerations in choosing waxes and klisters - temperatures, snow crystals old and new - before heading down to the skistall for application - the kick zone, base layer ironing, glide wax polishing, followed by six layers of blue extra.

Out on the snow, we didn’t have to go far before each of us was invited to ski a number of 50 metre runs under the full exposure of Go-Pro and Canon cameras. Time now for the video truth to be revealed about all our individual ‘styles’!

Back in the warmth of the hotel, we were each invited to reflect on our respective video footage - what was good and where there was room for improvement: that line through the shoulder, torso, knee and ankle at the point of weight transfer; ankle flexing; maintaining a still head; importance of timing, elbow and positioning the pole plant; and much more. A real highlight and a great way to learn.

For the afternoon, our focus shifted to maintaining short diagonal strides, turning techniques, and herringbone ascents.

Joy expounded the virtues of pilates - the importance of the ‘cylinder' between the diaphragm and pelvis and its relevance to good posture for our skiing. She mentioned a quote from John Muir and a principle that could easily be transferred to body movement and skiing:

“When one tugs at a single thing in nature, he finds it attached to the rest of the world.”

Spectacular bukleskyer sunrise was the precursor for a two-hour ski. In the far distance, on the slopes of Muen, we could see a herd of Rondane reindeer, protected for their unique gene pool. We headed north around a small lake - Stormyrtjønnet - over gently undulating terrain towards Spidsbergseter, all with the backdrop of the sun shimmering on the surrounding peaks.

Our task this morning was to concentrate on extending our arms back beyond our waist to generate more momentum and power in our stride, a point that was reinforced after lunch back at the Fjellhotell, when we reviewed a YouTube video of Swiss skier Dario Cologna!

This was the signal to head out once more to practice under the watchful eye of Ewen and the Go-Pro camera - double-poling, diagonal stride driving forward from the heel, running on our skis … Back in the hotel, we were invited to comment and reflect on our respective video footages, with the aim of identifying areas upon which to concentrate tomorrow and over the rest of the week.

On to individual pilates, where Joy helped us with specific areas of our posture and movement. Notable, and new for us all, was the notion of finding the balance point in the pelvis! In my case the focus was on awakening muscles to help with my ’snapping ankle’ tendon. This was followed by stretching, sauna, another magnificent dinner spread and an introduction from Joy to Mindfulness.

Today, we choose! That is, after some individual tuition on our skis. I took ‘un petit tour’ with Joy, taking in the grandeur of our setting, made even more dramatic by the powder blowing off the mountain tops - as inn of the weather that would unfold during the day. Already our tracks were disappearing under the spindrift. I joined Ewen who took a tactical decision to retreat into the woods for clearer tracks. The combination of sun, wind and spindrift made for spectacular photo opportunities.

A packed twenty minutes of tuition followed, with Ewen deep in thought and encouraging me between each exercise - base position, knees bent, leaning slightly forward from the hip, jumping from one stable foot to the other, short strides, lifting each ski just slightly back and up each time. Next was a focus on the arm movement - pushing forward with the shoulder and arm, pointing, back with the other arm and shoulder painting a straight line through the chest to the centre of the skis, bent elbow, pole plant by the foot, extend back and delay, forward by the knee, increase the pace and push up to shoulder level. Not much to think about then! Finally, combine legs and arms keeping low, with knees bent, hips forward. Magic!! More video, then off on my own time to put it all into practice.

Over lunch we reviewed our respective video recordings - all different, but each offering different tips and perspectives.

Back outside, with the spindrift on our backs, we headed for the shelter of the trees and the Trimløype. A group of weary snowshoers looked longingly at us as they beat a path into the wind and towards the sanctuary of the Fjellhotell. By way of contrast, the Trimløype was a place of tranquility and peace, with the sun glistening on the snow and occasional glimpses of Muen and the surrounding mountains to the north and east.

Time for a break, some rest, then on to pilates and the sauna. After dinner, Ewan led an informal discussion on ski-racing, tactics and clothing, with insights from Joy on hydration and nutrition, including importance of the '15-minute window’ for taking on carbs after exercise. Interesting for us given our all too often sedentary, modern lifestyles, but particularly relevant for one our group contemplating the Oslo Holmekollenski race in the future.

Rising air temperatures forecast - up to +4 degrees today. The dreaded klister beckoned, but wait … this was to be our lucky day! With perfect timing, we were offered the opportunity to try out sample pairs of Madshus Redline Carbon Classic Intelligrip Skis! Ewen remarked: "We would need to ski powerfully to get the best out of them."

No matter, striding out on the loype, we immediately noticed a difference. The smoothness of the glide was astonishing. Negotiating small uphill sections on the undulating track, with the embedded moleskin grips proved effortless. There was also the option to switch the binding forwards for more speed.

We skied north beyond Spidsbergseter, heading steadily uphill towards Dørhøgda. Magnificent views unfolded back over Venabu, while to the north the snowy expanse of the Rondane Mountains invited our gaze.

Ewen set us up for more video and photo shoots, this time with marketing in mind.

An exhilarating, but well-graded descent took us back down and across the plateau to lunch, photo sorting, reflections and learning.

All too soon, we were offering our thanks and best wishes to Ewen, sadly departing to make his way over to Scotland for his mother’s funeral. He had been a brilliant and gracious instructor, sensitive to each of our needs, and combining his knowledge and experience with Joy’s insights on body movement. We were now equipped with a set of specific areas upon which to focus our attention in improving our skiing.

That afternoon, we were offered the opportunity for solo skiing. I took a trip out to Brennflya over the aptly christened 'Devil’s Bridge’, opting for the relative safety of crossing on foot!

"What would you like to do today?” proffered Joy. We were all agreed - time for an all day tour. Joy suggested a couple of options. A southerly route through the trees gained favour on what was to be 23kms around Kyrkjegardsfjellet.

It proved to be a perfect choice, gently undulating with some challenging, but not overly difficult sections. The snow sparkled in the sunlight. Spectacular cloudscapes unfolded, as the jet stream played games with the ice crystals spread high above us and onwards over Rondeslottet ("The Rondane Castle”) - at an altitude of 2,178m this is the tallest mountain in the Rondane.

Back at the hotel, we were invited to join the start of Hotel Manager Line’s 60th birthday celebrations in the lounge. A local cranberry spirit accompanied a large and sumptuous carrot cake.

By agreement, our last session with Joy would be an extended tutorial in stretching with rollers and balls to find those pesky ’trigger points’. "Might be a bit painful”, she said, “but it will find out those muscles needing release!"

A sparkling wine was offered to all the guests as we toasted Line's birthday before another splendid dinner.

Afterwards, a grand birthday cake was revealed in the lounge - nothing less than a complete model of the Fjellhotel in its hilltop setting. Along with all the hotel guests, we were invited to join as Line was treated to a series of surprise entertainments, including a rendition on piano of Wind of Change (a ballad by rock band Scorpions and the biggest selling German single of all time), a witty and amusing video production compiled by the staff and the gift of a child’s tricycle in recognition of Line’s 2006 solo bike ride to India. What shone through all of this was the high esteem in which Line is held by her family, returning guests and all the staff - this was what makes the Fjellhotel a special place.

Finally, we mastered Airdrop, sharing and sorting photos and videos, before offering our thanks to Joy and heading off to pack and sleep ready for an early departure in the morning.

What better conclusion than we were all agreed that the week had surpassed our expectations. The snow conditions had been ideal, while the hotel hospitality had been outstanding. Our group had got on well together, feeling more like a team with an openness and willingness to learn from each other. Much of that was down to Ewan and Joy, who had proved to be outstanding and generous, thoughtfully exploring and combining their knowledge to give us a wealth of information and guidance.

I leave you with Ewan’s thoughts, shared through the medium of William Butler Yeats’ prose:

“But I, being poor, have only my dreams; I have spread my dreams under your feet; Tread softly because you tread on my dreams.”

You can read all about our Be A Better Skier trip HERE.