A hike along the Corsican super highway - The famous 'GR20' Trek 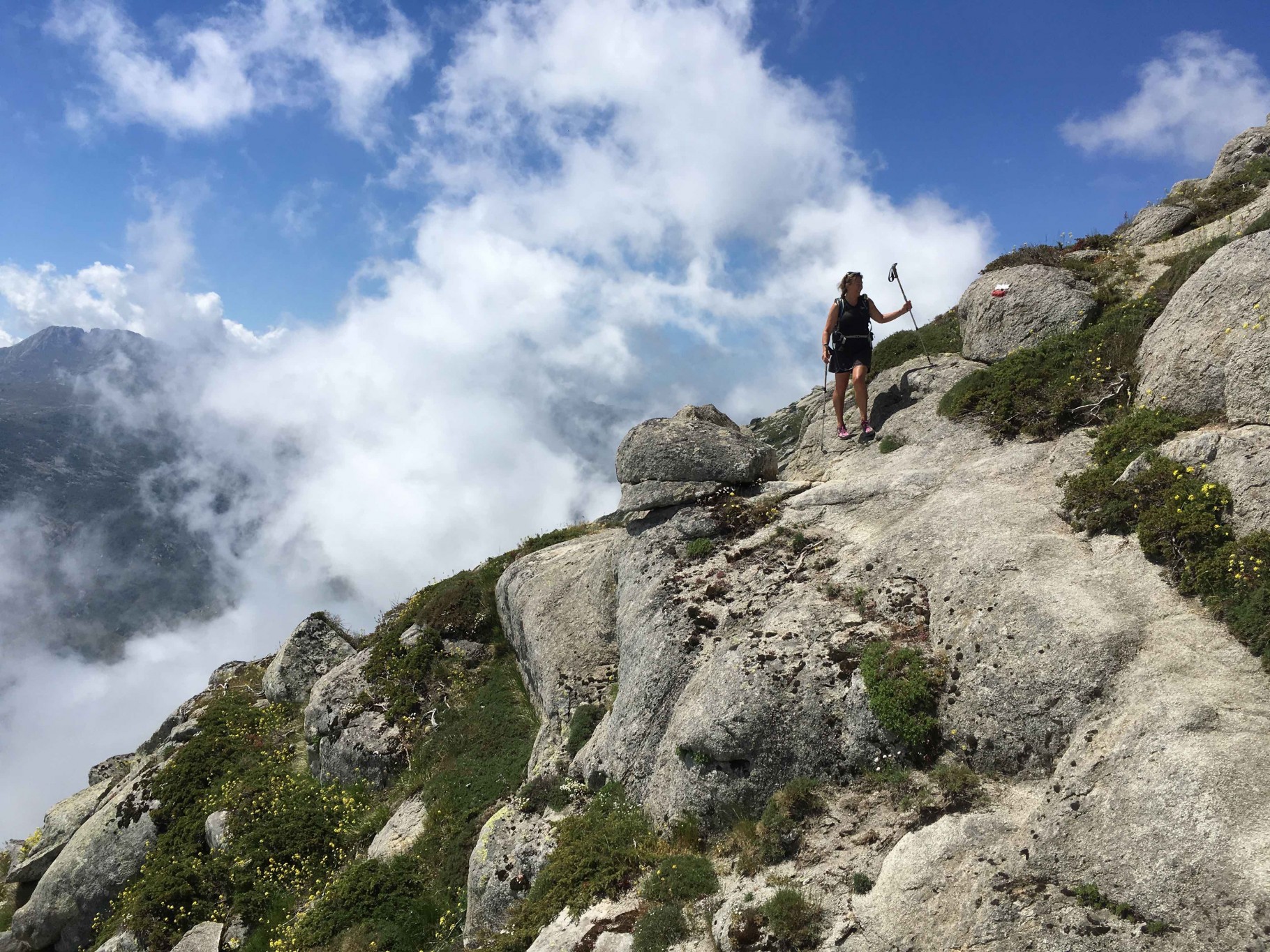 Corsica is an island in the Mediterranean Sea where the mountains refuse to be tamed, and where nature rules. Over the centuries the island, which is a region of France, has been invaded more than two hundred times, and the local people, who are fiercely proud, love to quote “Often invaded, never put under.” It’s an attitude and spirit, which continues today.

The landscape of Corsica is so much wilder than I ever imagined; rocky ridges, pristine forests full of aromatic plants, tumbling rivers of crystal clear water, high pasturelands where the shepherds still graze their sheep, and forest dens where the wild pigs forage in the undergrowth. For those who like statistics; Corsica is the fourth largest island in the Mediterranean, after Sicily, Sardinia and Cyprus. It is 183 km long, 83 km wide, and has 1000 km of coastline with over 200 beaches. I have been a full time International Mountain Leader for fourteen years, and I am happy to report that the island is now top of my list of favourite places to walk in the mountains.

For many years I have heard the ‘GR20’ discussed, and I have often wondered why it has such a special place in the hearts and minds of seasoned trekkers. After all there are many places in our world, which offer incredible hiking, and just how good can it possibly be on a relatively small island off the coast of Italy? The answer, in my mind, is that it is exceptional. Corsica is an island of immense natural beauty, from the stunning geology of the coastline such as the Callanques de Piana, to the dramatic rocky ridgelines of the GR20. Indeed, clients on our recent GR20 hike were overheard remarking that the scenery and hiking had “far exceeded our expectations".

‘GR’ represents the French phrase used to describe a trail, which is part of the European network of long distance hiking trails. It refers to a ‘Grande Randonnée’, which means a ‘long walk.’ The trails in France alone cover approximately 60,000 kilometres, that’s 37,000 miles and each route is identified by a number, hence the GR20. You know you are hiking a ‘GR’ if you are following red and white flashes of paint, which are to be found every so often on rocks, or trees. The GR20 is about 180 kms long, running from north to south down the spine of Corsica and takes most hikers about 15 days. The fastest completion of the route is a staggering 31 hours set by French mountain runner, Francoise D’Haene in 2016. The trail of the GR20 runs between the mountain villages of Calenzana in the north and Conca in the south. The northern section has a fearsome reputation for rocky scrambling, and difficult route finding, while the southern section, although still very challenging and rocky, has a more mellow reputation. We currently offer the entire route as one of our Scheduled Departure trips, but will soon be adding the southern section as a separate holiday as we recognise that the trip in its entirety is a major investment of time and money, while the southern section can be done in just one week and is more accessible in terms of fitness and experience.

It’s ‘wild’! The over riding impression I have of Corsica is that the landscape is still largely untamed, that the villages are suffered by the mountains rather than dominating them, and that the people are ‘Corsican’ rather than French. Twenty per cent of the island is forest, but if you are hiking the GR20 you will be left with the impression that much more of the island is forest. From the ridgelines of the GR20 it seems that the dense forest stretches for many miles in every direction. I found myself reflecting on the boast that the island has been invaded over 200 times, but never, in the minds of the locals, been truly conquered, and frankly I am not surprised. Invading this wild landscape with its mountainous terrain and dense forest would require a very determined force and most surely have been a daunting mission for any invading army. Today chatting to people in the villages you will find they are quick to make it clear they are Corsican and not French. Indeed, there is still a separatist movement on the island, which calls for independence from France. It was only in the late 1990’s that separatist violence, including the bombing of public buildings, was brought under control. Although there may be continued calls for independence Corsica today is a friendly and safe haven for tourists and the locals are delighted to welcome visitors.

The wildlife also sets Corsica apart as there are a number of species which are unique to the island. The Corsican deer, which was rendered extinct in Corsica, was re-introduced from Sardinia in the 1990s and now thrives. There are various species of lizard and reptiles, which are only to be found on the island such as Bedriaga’s rock lizard which you will encounter many times while you hike on the GR20. These brown lizards are to be found sunning themselves along the trail side by side with the gorgeous green and blue Tyrrhenian wall lizards.

Then there are the wild cows, wild pigs and horses roaming the ranges. It is not uncommon to drive round a bend on a vertiginous mountain road and be confronted with a herd of cows lying around chewing the cud. The Corsican cow is a fawn coloured animal with lyre shaped horns, which often ranges freely. There are also Corsican pigs roaming wild and free in the forests and you will most likely encounter them on your travels on the island. In 2006 a bid to save the wild pigs led to the official recognition of the breed, which took the name “Nustrale”. Today you will often see ‘Porcu Nustrale’ featuring on a menu on the island. The Corsican horse was not officially recognised as a breed until 2012. It is a short, compact and powerful animal, usually bay in colour, and been 12 to 14 hands in height. Although they are not technically a ‘wild’ horse, there are herds of horses, which the locals will describe as ‘wild’, which roam on the plateaux.

The maquis and the scents of Corsica

For many people the lure of the ‘maquis’ is sufficient reason to visit the island. The maquis is the name given to the dense blanket of evergreen shrubs, which carpet much of the island from sea level up to about 900 metres. These aromatic shrubs create an experience, which for me is now the sweet smell of hiking in Corsica. Imagine yourself on a hillside on a warm summer day and inhale the fragrance of rosemary, myrtle, sage, mint, thyme, lavender, eucalyptus, and juniper. There are also many other scented flowers, which are local to Corsica, that add to this amazing sensory overland and which are used as a base for perfumes and essential oils.

The maquis also has another connotation. The French Resistance fighters of the Second World War, adopted the name ‘maquis’ and having hiked along the GR20 I can imagine those who lived and fought in the mountains would have readily taken the name ‘maquis’ to define their movement. Indeed, the name became synonymous with Resistance Fighters throughout France, and historians are still unsure as to how this Corsican term arrived on the mainland. In Corsica there is a saying ‘prendre le maquis’, ‘go into the bush’ and is used to describe someone who leaves the village to live in the forest, biding time to seek revenge. Eventually, such Resistance Fighters became known as ‘maquisards, people of the macquis. In the tiny village of Zonza in the south of Corsica you can visit a museum, which documents the struggle of the people of Corsica against the Nazi occupation of the island in WW2.

This is a phrase which you will see on many of the souvenirs which can be bought on the island. The Corsicans are a fiercely proud people with a rich and colourful history, which recounts the many invasions of the island. A few facts which paint a picture of the last centuries: Corsica was sold by the Italian state of Genoa to France in 1768 as a result of Genoa being largely bankrupt by various wars and in need of hard cash. This led to a guerrilla war against the French troops and triggered the ‘Corsican Crisis’ in Britain where debate raged over whether Britain should intervene. Eventually, a constitution was adopted that made Corsica a kingdom in a union with Great Britain, but to cut a long story short the island returned to French rule in 1796. Yes, I know that is a very simplified version, but there are many sources where you can enjoy informing yourself about the history of this wonderful island.

In short I find the island and its culture an interesting mix of Italian and French, though overall the feeling is that the true identity of this island is Corsican. The island does have its own language although today only around 120,000 people out of a population of 309,000 still speak some ‘Corsican.’ It is a language that is officially defined as a Romance language that is closely related to Tuscan, and therefore Italian. I found that if you have a grasp of French, and speak some Italian then you could make out the general sense of any information boards written in Corsican.

All of this and more will be part of your experience while hiking the GR20. I found that more than on any other route I have done there is a sense of ‘community’. Exchanges on 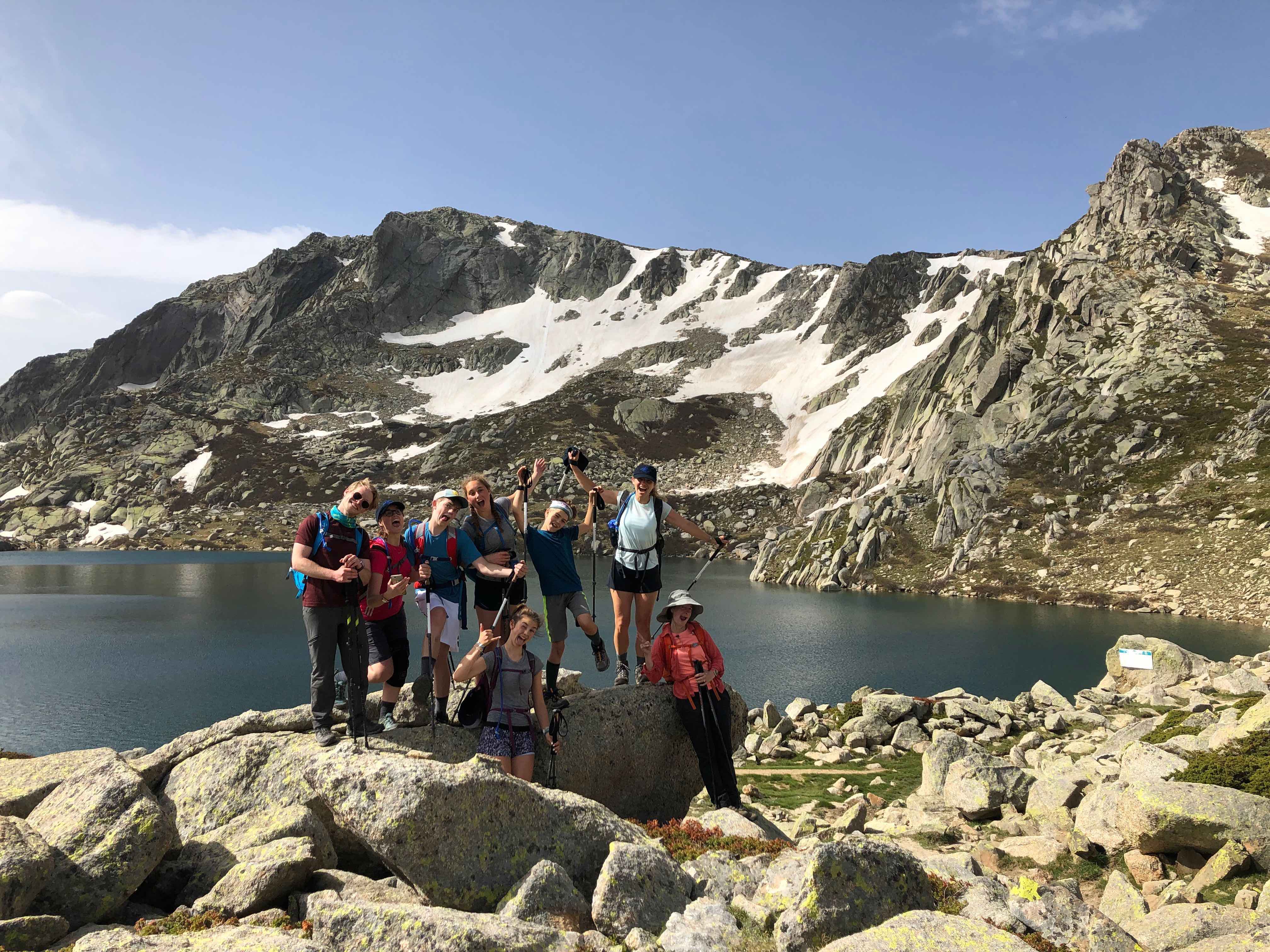 the trail about conditions ahead, or behind, about epic days and the aches that go with it, about the weather and the wildness, getting lost and then found, the joys and the challenges, all make this trip feel rather special. Our version of the GR20 means that you have your luggage carried for you to the next accommodation, however, other hikers without our contacts and knowledge are left carrying their own camping equipment with rucksacks that frankly are a hazard on the steep and exposed sections of the trail.  We would love to share our passion for Corsica, the Île de Beauté, as it is known. This simply means the ‘Beautiful Island, and that really sums it up. The GR20 is a truly wonderful adventure for those who love a challenge and the chance to experience a colourful culture.

We currently have a trip guaranteed in September 2019 and would love to introduce you to Corsica; its mountains and its culture, or start planning for 2020 when we will be offering either the 'north' or the 'south' split over two separate weeks. See full trip details: Corsica's GR20 Trek.