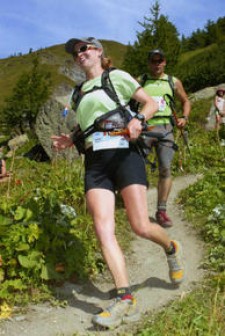 A decade ago there were only a handful of off-road races around the world from which an endurance runner could choose to pit him or herself. Now, with the popularity of ultra marathons continuing to grow year by year, part of the challenge is just choosing which one to enter! Of course, one of the highlights of any mountain race is the spectacular scenery — so here’s our guide to four races that offer a sublime visual and sensory experience (and a really tough challenge to boot!):

Greek Spartathlon
The Spartathlon race has taken place each year since 1984 and is one of the toughest ultramarathons on the circuit and is founded on one of Greece’s most epic legends from the depths of history: the Spartathlon revives the footsteps of Pheidippides, an ancient long distance runner from Athens who, before the battle of Marathon in 490 BC, was sent to Sparta to seek help in the war with the Persians. The battle itself remains one of the most famous in world history, constituting a landmark and starting point in the history of civilization. According to Greek historian Herodotus, Pheidippides arrived in Sparta the day after his departure from Athens - a truly epic run of 250km!

Now runners can literally follow in his footsteps. The Spartathlon has been described as the world's most gruelling ultra marathon: the route runs over rough tracks, muddy paths (it often rains during the race), traverses vineyards and olive groves, climbs steep slopes and, particularly challenging, takes the runners on the 1,200m/3,600ft ascent and descent of Mount Parthenio in the middle of the night! All those who make it to the final descent into Sparta have completed an incredible achievement! The Spartathlon takes place this September - more info here.

Gorge Waterfalls 50/100k, Oregon, USA
The Columbia River Gorge races, which take place in April each year, feature an amazing backdrop of old-growth forests, mossy rocks and feature technical and challenging root-covered trails. The Columbia River Gorge is a short drive from Portland, Oregon, and is the largest national scenic area in the United States. The area boasts the greatest concentration of waterfalls in the whole of North America. In fact, the Gorge Waterfalls 100k is unique for the sheer number of waterfalls the route takes you past - possibly more than you'll be able to count! One, the sublime Ponytail Falls, you'll actually run right underneath! Feeling inspired? There’s a great video from the Rainshadow Running series that features the highlight of the race — watch it here.

UTMB, Chamonix, France
If you’ve heard of one trail race — it’s the Ultra Trail Mont Blanc (UTMB). Now in its fourteenth year, the UTMB is justifiably a legend amongst trail runners the world over. Towards the end of August each year athletes from across the globe make a pilgrimage to test themselves in this epic race circling Mont Blanc that traverses three countries: first France, then Italy, and finally Switzerland. The 166km/approx 100 mile route has a total elevation gain of close to 9,400m/30,800ft route and begins in the Chamonix, then makes its way through picturesque valleys along forest paths, rising up through open meadows resplendent in the colours of alpine flora. Crossing into Italy the path becomes more formidable, flanked by jagged peaks and imposing cliffs.

The route then takes runners through the pastures of the Italian Val Ferret, up and over the Grand Col Ferret and into the Swiss Valais where, thankfully, the terrain is just a little sympathetic — but it’s all relative at this point!

Athletes still have a challenging journey home via Trient, Vallorcine and, back across the border, there’s a climb awaiting at the Col des Montets! Running the UTMB is as much an internal adventure as a voyage through the stunning landscape of the Mont Blanc massif, promising a truly unique experience for the dedicated trail runner. Kirsty Reade has written a great piece for The Guardian detailing her exploits in rising to the challenge of completing the UTMB - read it here.

Old Mutual Two Oceans Marathon
The Old Mutual Two Oceans Marathon is a classic race, and one of the oldest in the southern hemisphere, having been taking place each year since 1970. The race draws sporting enthusiasts from across the globe to the scenic cape for a unique and trying athletic experience, and is arguably one of the world’s most beautiful sporting events. The 56km Ultra Marathon takes you along a stunning coastal journey around the Cape Peninsula.

Florian Neuschwander, Germany’s best ultra runner, has called it “the most beautiful ultra in the world because you directly run along the ocean coast” and noted how refuelling during the race is just little different from other experiences “…the atmosphere on the course is amazing – instead of stodgy gels you get handed potatoes by the spectators. It's a funny run.” Find out more about South Africa’s Two Oceans Marathon here.

This summer and autumn we’ve expanded our programme to cover the best trail running adventures in the Alps, Dolomites and the Verdon Gorge.

Find out more about all our running trips here — and do get in touch if we can help with any questions!