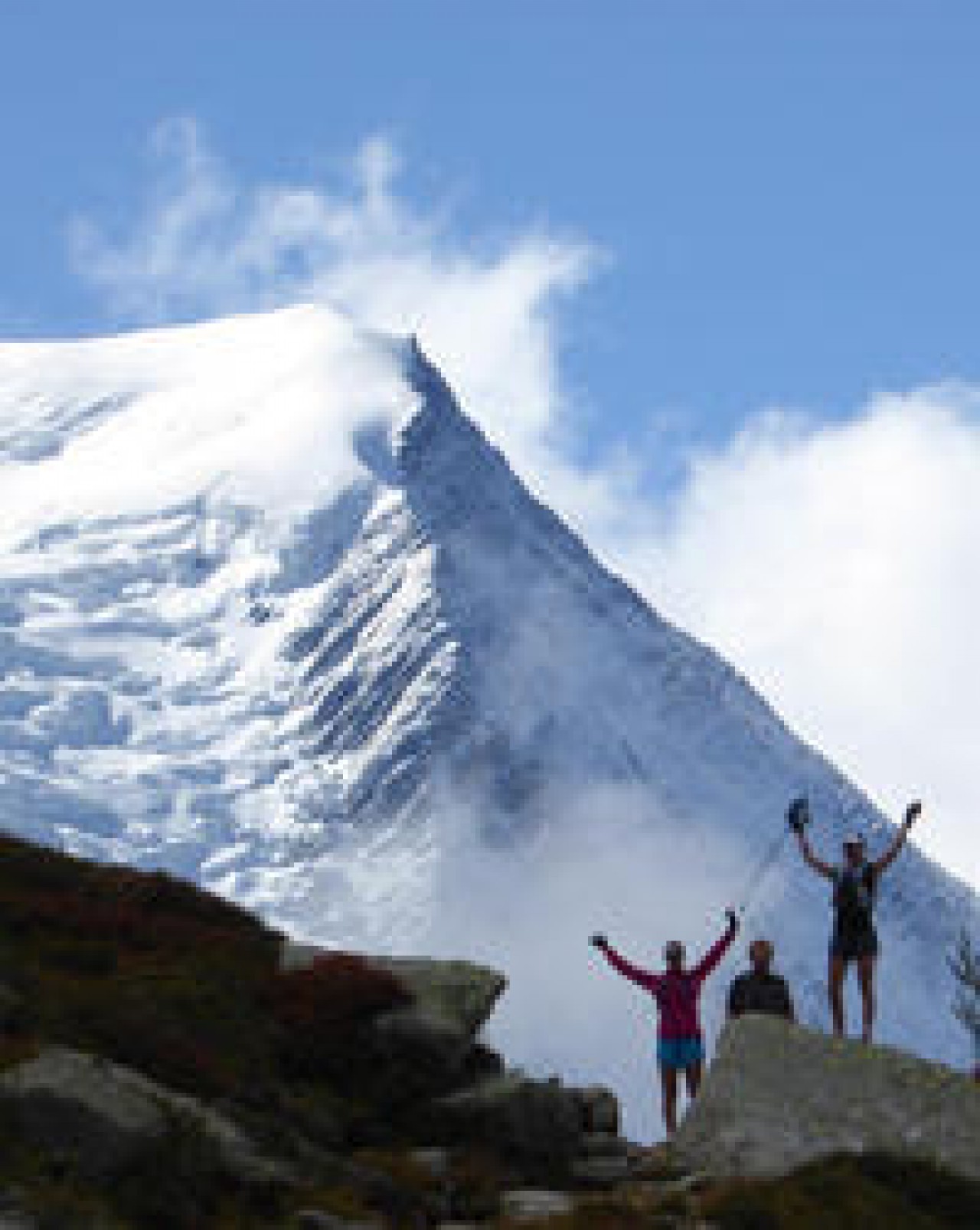 Standing in front of the church in the centre of Chamonix, looking up at the sun setting on Mont Blanc. Breathing slowly to control the nervous energy. Waiting. Trying to make a personal space in a crowd of more than two thousand runners. Wired bodies and minds, tense, yet totally still. All poised to cross the start line. Ready to run into the night. Preparing for whatever the next two days will bring. Nervous, yet calm.

Then suddenly, running down the main street in a blur of cheering home crowds, hearing that haunting soundtrack that marks the start of every Ultra Trail du Mont Blanc. And just running. Running, walking, crawling a full lap around Mont Blanc. For nearly two days, broken beyond broken but still putting one foot in front of the other. And all the way, feeling the support of the thousands of people involved in this incredible race. Not daring to imagine what it feels like to finish. Just once in a lifetime …

Long distance runner or not, it’s easy to see why the UTMB is legendary in trail running circles. One of those seemingly unachievable ticks for the bucket list, alongside The Hardrock 100, Badwater Ultramarathon and the Marathon des Sables, finishers of this race are awarded ultimate trail community respect, whatever their time. The UTMB has captured the imagination of runners all over the world, who flock in their thousands just to run on Chamonix’s trails and test their bodies and their will in the ever present shadow of Mont Blanc.

Now in its fourteenth year, this epic race crosses into three countries: France, Italy and Switzerland - a 170km/ 104 mile circuit around Mont Blanc with a staggering 10,000m+ of altitude gain. Taking place at the end of August, the whole mountain community in all three countries comes alive with runners, supporters, film crews, medics and an army of thousands of volunteers.

Places in this ultimate suffer-fest are highly coveted. On paper, it’s a race for super-humans, including Spanish Salomon runner Killian Jornet and The North Face’s British athlete Lizzy Hawker, both multiple winners of the UTMB. The fastest athletes cross the finish line in an unbelievable 19-20 hours, while the back of the pack are still on their feet after 2 nights and 2 days, non-stop.

American ultra runner Scott Jurek is a seven times winner of the Western States 100, author of Eat and Run and holder of the Appalachian trail record. Even as one of the US’s top ultra runners, he seriously underestimated the UTMB. Whilst he’s gone on to eventually complete the race it took him four attempts before finally crossing the finish line.

But trail running in Chamonix is about so much more than the UTMB. The town and its network of mountain paths have deservedly earned a reputation as a running Mecca, and not just for elite athletes. Quite simply, Chamonix is one of the best trail running destinations in the world; combining jaw-dropping beauty, varied terrain, easy accessibility, altitudes than are easily acclimitised to and unforgettable charm. But most importantly trail opportunities for ALL levels of runner.

Over the summer months and run up to the local trail running events such as the Mont Blanc Marathon, UTMB and Trail des Aiguilles Rouges events the Chamonix valley has an incredible, if not unique, vibe of ‘all about running’: shops dedicated to trail running, people of every nationality out and about the main street pre or post training in their running kit, all carrying small packs and poles! It’s as if the world of trail running gravitates towards Mont Blanc for an annual pilgrimage! And yet due to the thousands of kilometres of trail available in and around Chamonix, once out in the mountains it all still feels peaceful.

Broken down into bite-sized chunks, the route of the UTMB (or its sister race, the 103km CCC – Courmayeur, Champex, Chamonix) can easily be an achievable holiday goal for runners of all abilities. With daily distances of 20-30km on mixed mountain terrain, and relaxed nights spent - actually sleeping - in charming mountain refuges or rustic alpine hotels; completing the route of this epic race is a realistic goal for runners of all levels.

Tracks and Trails offer trail running holidays for runners of all abilities. If you are new to trail running or want to simply ‘feel’ the unique vibe of running in trail running ‘mecca’ of the world then join one our Alpine Trail Running Camps

If you would like to run point to point then look at our 4-6 tours including the Mont Blanc Ultra Trail.

Get inspired! Watch this video of trail running in the Mont Blanc range, filmed with Tracks and Trails and Nike at the UTMB in August 2015.