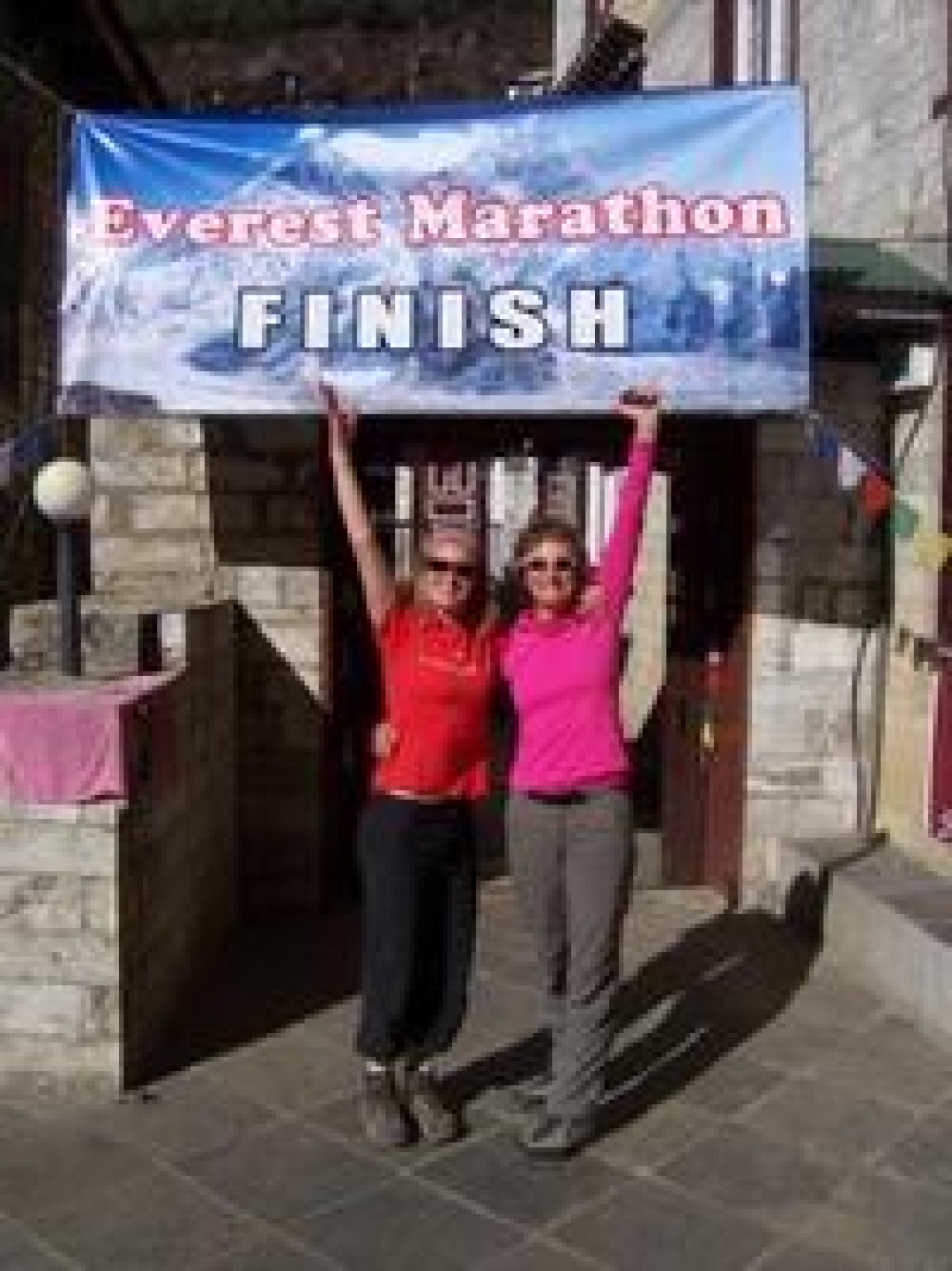 Janet and I spent a further 2 weeks continuing our training in preparation for the big day - the Everest Marathon. In the Gokyo Valley we ascended Gokyo Ri at sunset and visited the glacial lakes surrounded by views of the Everest range and Cho Oyu, 8201m. Runners were able to take things at their own pace depending on their acclimatisation.

Some runners, more accustomed to road running, had more than just the altitude to test them. My test was whether i'd last another 2 weeks in a tent! Now on my 8th week of camping I was dreaming of my warm comfy bed and wondering what it would be like to not have to sleep in two down jackets and in a down sleeping bag (not to mention all the layers underneath to combat the overnight cold of -20).

That, along with walking uphill for weeks on end didn't register as my 'normal' marathon preparation! In the meantime we kept our minds busy testing the lovely bakeries along the way (carbo loading I believe it's called?) and by soaking up the culture of the region visiting monasteries and enjoying living in the mountains.

Each runner was required to have a medical the day before the race to be deemed 'fit to run' the 42km course. As expected, many runners were recovering from stomach bugs, chesty choughs (commonly known as the 'Khumbu cough' due to the dry air in the Solukhumbu), altitude headaches and loss of sleep - but thankfully by race day most of us were given the thumbs up to race.

Finally we arrived at our destination, Gorak Shep, 5140m, the race start and the Basecamp setting for several 1950's Everest expeditions. Here we all slept in simple teahouses and were woken at 4.30am with breakfast tea and porridge in bed - a luxury! The time always flies on race mornings and by 6.15am we were all stood waiting for the signal to start.

At 6.30am we crossed the line, anyone would have thought the local Nepali runners were only running a 100 metres, they shot off out of sight. One lady was also wearing her regional dress over her running tights! The first mile I would say was technically the hardest due to the altitude and crossing the glacial moraine but thankfully on fresh (ish) legs - then we began our descent.

Our route was mainly on good trails but being that high means when you are going down you can still feel the lack of oxygen. The descent meant I ran a little too hard at the start so my legs definitely suffered when we began the 1100m of ascent! The local support especially from the bright cheery children and regular drinks stops was really appreciated. Not to mention negotiating fully loaded yak trains on route!

As the temperatures rose and we neared Namche Bazaar (3440m) I got my final boost of energy to see my tired legs up the last hill to the finish line crossing it in 6h36, 3rd non- Nepali lady. Anna Frost a pro-runner from New Zealand swept up breaking the female record flying round the course in 4h35! Janet excelled and came in 7h42, 6th non-Nepali lady and the first male was local Deepak Raj Rai in 3h59. The hardest bit was the 6 hour hilly walk out the following day.